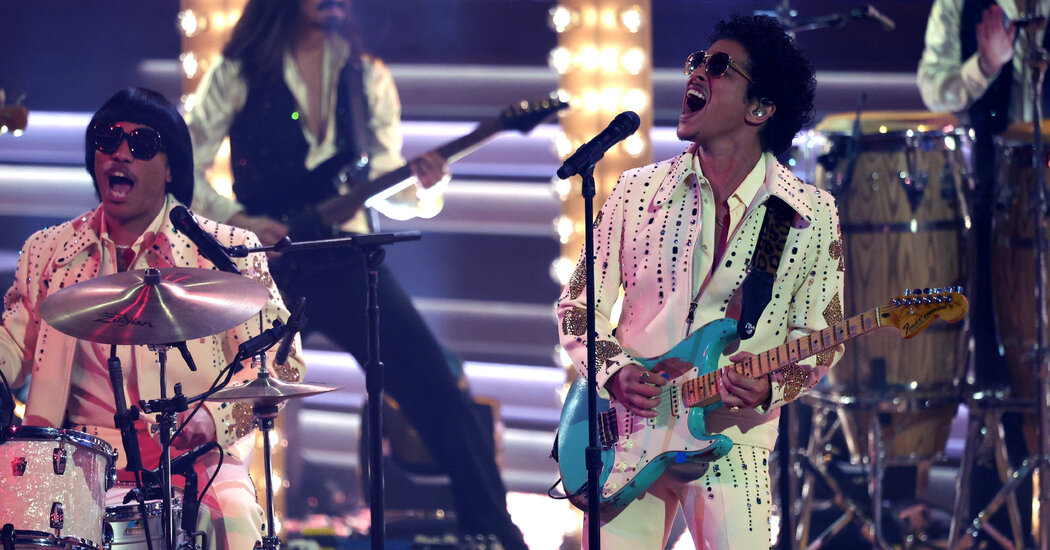 At the Grammys, young people do better when they look old

Such is the chicken’s egg conundrum that troubles the awards, as well as the pop music industry, coexisting in an uneasy alliance, glaring at each other while stealthily holding hands. At the Grammys, maturity is rewarded, and often demanded, putting it in direct contradiction to a music industry that continues to value youth.

At the 64th Annual Grammy Awards, which took place in Las Vegas on Sunday night, those tensions played out in multiple ways. Take Justin Bieber, who began his performance of the glistening, slinky “Peaches” sitting at the piano, singing earnestly and with pulp. For Bieber, 28, not generally thought of as a musician’s musician, it was a sharp ploy, or perhaps a plea.

Bruno Mars and Anderson .Paak – playing Silk Sonic – won both song and record of the year for “Leave the Door Open”, an incredibly smooth slice of 1970s soul. they also nailed the aesthetic of yesteryear, from costumes to hairstyles to mannerisms. The two men, masterful purveyors of retro sonic ideology, are 36 years old.

Jon Batiste, the New Orleans jazz scion and late-night bandleader who won Album of the Year, delivered a performance that channeled second-line funk, classic soul and just the slightest touch of hip-hop. He is 35 years old.

It’s the kind of performances and performers the Grammys craves: looking young but aiming to embody the old-fashioned values ​​of musicality. Because Grammys telecast draws generations of viewers and because Grammys voters come from a broad pool that skews older people, what emerges on the show and in the awards themselves is kind of pitiful. compromise that holds true innovation at bay. The artists nominated in the top categories were refreshingly democratic, in terms of gender and age, but Batiste and Silk Sonic beat them all.

This meant that the only one left for Olivia Rodrigo to be nominated in all four was Best New Artist, which she did. Rodrigo was clearly last year’s star, and the prime placement he received on telecast, with one of the early performances, signaled that the Grammys understood his power. She was an uncut jolt of youth, performing “Drivers License” with a light grunge water, then later thanking her parents by accepting the award for Best Pop Vocal Album for “Sour.”

But it was something of a fake, like most of the show’s opening performances, which also included precocious Grammy fave Billie Eilish, K-pop band BTS, reggaeton star J Balvin and Lil Nas. X, whose mix of raunch and wit felt a bit stale during his medley of recent hits. The only other time the show approached a moment of honest freshness was when Doja Cat ran onto the stage to accept her award for Best Pop Duo/Group Performance after leaving the room for a break in the bathroom. She and co-winner SZA laughed at the snafu, and Doja spoke about the unfiltered way she’s become known for, which seemed fresh in this context: “I like to downplay a lot of [expletive]but it’s a big problem.

As for several other young stars, well, they declined to appear — Tyler, the creator, who won Best Rap Album; Drake, who withdrew from consideration in the categories in which he was nominated; the Weeknd, who after last year’s non-nomination debacle said he would never submit his music for Grammys consideration again; Cardi B, nominated once. (Taylor Swift wasn’t in attendance either, but the absence didn’t sound so much like a protest as an acknowledgment that this year was unlikely to bring her any trophies.)

This list of no-shows could fuel another awards show or gig (as hip-hop mogul J. Prince has proposed). And therein lies the Achilles heel of the Grammys: it needs artists like these, both for relevance and also as tribute-payers. As hip-hop has become the dominant sound of pop music, its stars will become the elders of tomorrow. If the Grammys continue to alienate its young titans, its attempts to honor music in the future will systematically fail. (That was underscored by the oldest star performer on this year’s show: Nas, 48, who spent half his set performing 20-year-old songs that were long-deserving of a Grammys stage.)

This chasm — between the Grammys and the youth, between the Grammys and hip-hop — means the show has to double down on young stars eager (and excited?) to be in dialogue with the sounds of yesteryear. Some of the most noticeably mature vocals of the night were from Rachel Zegler, singing Sondheim as part of the in memoriam segment. One of the show’s most emotional moments came from R&B singer-songwriter HER, who may have been over-indexed with acclaimed awards in recent years. Her performance, alongside Lenny Kravitz, Travis Barker and Jimmy Jam and Terry Lewis, connected her to three generations of funk and rock.

And then there’s Lady Gaga, the former pop disruptor who has become the epitome of institutional heritage through her ongoing work with crooner Tony Bennett. Their latest album, ‘Love for Sale’, won Best Traditional Pop Vocal Album, and Gaga paid tribute to 95-year-old Bennett – who was not present – by singing two of the album’s songs, which date back to the 1930s. His singing was sharp and invested, advocating for decades-old standards on a contemporary pop stage, the embodiment of the Grammys’ cross-generational goals.

It was easy to lose sight of the fact that Lady Gaga is only 36 years old. And looking at the next generation of pop talent — Eilish, Rodrigo, Doja Cat, Tyler, The Creator and beyond — it’s hard not to wonder how long they’ll be allowed to be young before the Grammys are over. insist that they grow up.