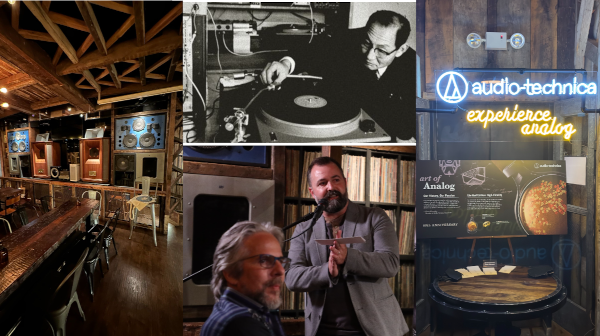 Audio-Technica embraces “the art of analog” on its 60th anniversary

By Shannon J. Reid Last updated Oct 22, 2022
Share
Hideo Matsushita was determined to bring the warmth of analog music to as wide an audience as possible. He therefore began to organize “LP concerts” at the Bridgestone Museum of Art in Tokyo in the early 1960s at the request of the museum’s director. The events were more popular than anyone could have imagined, allowing him to turn his passion for music into a business. So in 1962, from his small apartment in Shinjuku, Japan, Matsushita founded Audio-Technica and began selling the AT-1 and AT-3 phono cartridges he had developed to audio equipment manufacturers. The business grew rapidly, and within a short time he was able to move to a larger headquarters in Machida, where the business is located today.

Over the years, Audio-Technica has moved from phono cartridges to designing and manufacturing turntables, microphones, headphones and music mixers, some of which are based on digital technologies, but analog remains a central objective of the company.

To celebrate the achievements of its founder and the company’s 60th anniversary milestone, Audio-Technica followed up its recent introduction of the limited-edition AT-MC2022 dual moving coil phono cartridge and flagship ATH-W2022 closed-back wooden headphones. ($9,000 each) with a special “Art of Analog” event in New York earlier this week. Hosted by A-T’s Gary Boss and Peter Baker, the event took place at the Turntable LP Bar & Karaoke Club, a gastropub in midtown Manhattan’s bustling Koreatown neighborhood with a neat interior lined with records vinyl records, album covers and vintage stereo equipment as well as an extensive collection of vintage radios from the 50s and 60s.

The highlight of the event was a panel discussion with top sound engineers punctuated by music played on a vintage stereo system anchored by Audio-Technica’s $849 AT-LP7 turntable and featuring stereo pairs of Westminster loudspeakers from Tannoy and JBL Professional Model 4350 and Model 4612B loudspeakers powered by a Crown XLS 602 amplifier (with a Crown DC300A in silent display).

Baker spoke of Matsushita’s commitment to forging human connections through music and bringing high-fidelity sound to the masses at affordable prices, starting with the AT-1 – the first truly affordable high-quality phono cartridge. of hi-fi. He then introduced moderator Justin Colletti, mastering engineer at Joe Lambert Mastering, who, in addition to running the music production-focused website SonicScoop.com, has written hundreds of articles on the art, science, and sound and music business. Taking the microphone, he discussed the differences between working and listening to music using analog versus digital technology and spoke about the need to move away from the many computer screens that dominate our lives, including those related to the production and listening to music. .

Colletti also spoke fondly of the ritualistic experience of dropping a needle on a vinyl record or spotting a CD before introducing the esteemed panelists: Chris Mara, Lenise Bent and “Senator” Jimmy Douglass – all of them explored the nuances of analog music recording. .

Mara is the founder of the Nashville recording studio Welcome to 1979 and has worked with artists such as Pete Townsend, Applewood Road and Jason Isbell. As an engineer, producer and educator, Lenise Bent has worked with, among others, Blondie, Steely Dan and Supertramp and was the first woman to record an RIAA Certified Platinum album. Jimmy Douglass, owner of the Magic Mix Room recording studio in Miami, rose to prominence as an engineer and music producer while working with countless hip-hop artists and producer Timbaland, in addition to artist fusion jazz Billy Cobham, soul music legend Aretha Franklin and many more. rock-and-roll artists, including AC/DC, Foreigner, Hall & Oates, Led Zeppelin and the Rolling Stones.

A passionate discussion ensued. Bent expressed concern that with the advent of digital and the ability to do a virtually unlimited number of covers, the music sometimes loses some of its emotion. Some errors perhaps should not be corrected, she said. Instead, the goal should be to create not the perfect recording, but the right one.

Douglass agreed with Bent, stating that the ability to manipulate a recording almost infinitely can lead to overthinking and “over-crunching” of one’s output, thus suppressing one’s energy. Douglass claimed that he can work faster with analog equipment and can often accomplish what he wants with “one or two touches”. With digital equipment, there is too much to know. He admitted, however, that in complex situations analog can get awkward, recalling an occasion when he needed four pairs of hands to work on a single analog mixing console.

Mara said something that each of the panelists fully agreed with: the optimal approach is not to reject analog or digital, but to work in the area that best suits the project and the circumstances.

After the roundtable, attendees were treated to a Korean buffet and each received an Audio-Technica record cleaner and a limited-edition turntable, featuring artwork by Ukraine-based calligrapher and lettering artist Eugene Berd. The slipmat is available from audio-technica.com for $14.99. All proceeds from its sale will be shared between Ukraine’s largest children’s hospital and Ukrainian charity UAnimals.

The “Art of Analog” event is just one part of Audio-Technica’s ongoing 60th anniversary celebration. In addition to introducing the AT-MC2022 phono cartridge and ATH-W2022 headphones, the company announced a special anniversary donation program to support its longstanding relationship with Playing for Change, a global movement created to inspire and connect the world through music.

Giorgia Meloni is to be sworn in as Italian Prime Minister. Some fear the right turn she promised to take