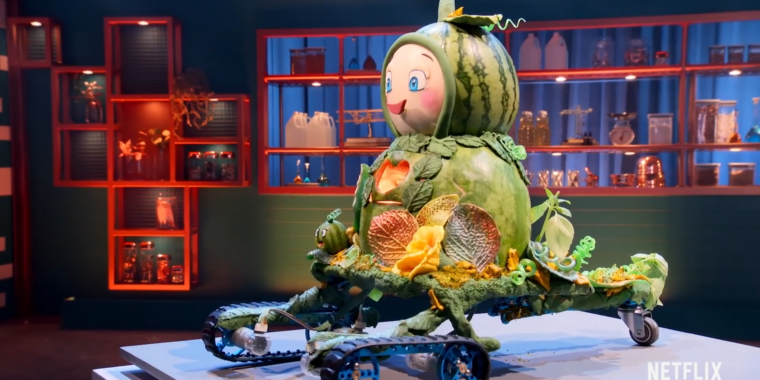 Baking Impossible: The Big Nerd Tote For The Engineering Set

Structural, Physical Integrity, and Charging Properties: How often do you see reality TV shows that reward applicants for painstaking engineering efforts? And how often do you see these creations then peeled with a fork and tasted by the judges?

I’m not sure exactly how Netflix’s algorithms, the ones that look at millions of hours of viewers’ viewing habits and guess what we’ll like next, settled on the idea of â€‹â€‹combining Excellent chef and Down with the myths. But as I settle into the gloom of fall and look for shows to watch with non-nerds in my life, I’m convinced that the new shows Cooking not possible is a good idea.

Having watched a few episodes now, I can safely recommend it as one of the best, smoothest reality shows, even if it’s too cheesy at times for its own good.

“Screwdriver and spatulas down”

In this eight-episode series, Netflix throws contestants into a huge lab that has everything a hobbyist or baker could want. On the one hand, the lab is covered with laser cutters, 3D printers and puzzles. Oversized ovens, industrial-grade blenders, and a huge pantry fill the other side. Each competing team has an established baker and award-winning engineer, and each episode asks teams to design and produce some kind of elaborate object that does three things: tastes great, looks great, and performs a defined function.

As an example, the first episode of the series revolves around each team building a functional sailboat from food. It should be almost entirely edible, except for any remote control functions that control its direction, and it should travel through a 20-foot pool of water with only a gust of wind as propulsion. (Just afloat won’t do; every boat needs legitimate sails to both catch a gust of wind and then descend like a tasty amuse bouche.)

At the level of pure reality TV, Cooking not possible passes the crucial “no fast-forward necessary” test. Most reality TV series supplement their runtime with made-up dramas or personal story segments that are too long, arguably to fill an exact episode length for commercial breaks in the middle of the episode. Thanks to this series’ emphasis on the process of creation and crafting, and its ability to alternate between two types of crafting (functionality and flavor), each episode is generally adept at making us wonder, “Go- do they really get this edible tel -and stuff like that? “

Quick personal stories pop up between the writing and team blocking phases, and they’re tidy and entertaining punctuation marks, as opposed to shrug-worthy attempts to make up some drama. The results are more American than British, so if you’re looking for the smoothest, fluffiest reality TV, Cooking not possible might not be your bag, especially in the rare event that a baker and engineer disagree on how to complete a project. But overall, it’s certainly less mean and aggressive than your average Bravo reality show.

Some robots cannot drive on roads covered in marshmallows

The show is at its best when we see each team of randomly assigned contestants interacting. More often than not, teammates appreciate each other’s expertise, and Netflix’s edit emphasizes the ideation, execution, and rapid review process of each project. The scope of these projects is huge, as teams have eight hours to complete the challenge of each episode, but the big picture and most important details are covered. Then we go, usually with crisp camera cuts from team to team, as everyone decides which foods make the most sense for the project.

The creation of each competitor, from the most impressive to the most banal, finally takes its time on the podium, whether in technical demonstration or in camera lingering on the dessert “centerpiece” of each edible creation. On a personal level, cooking and baking reality shows drive me nuts when I watch food that I can’t eat, and therefore, I enjoy Cooking not possibleWell-demonstrated gadget gimmick. It gives me more to, um, to bite into, especially when the series devotes an entire episode to satisfying, food-filled Rube Goldberg devices.

But it’s also an unprecedented series concept, and it needed a little more engineering before going into production. The biggest problem is that the majority of competitors fail every episode’s testing requirements, despite the elaborate robo / snack hybrids they build. The prowess is clearly there, with the bakery side made up largely of bakery owners and the engineering side made up of decades-old toy makers (and even an engineer from NASA’s Artemis Project). But the demands placed on them may be too high.

The worst challenge is that each team has to build a mobile robot capable of crossing an obstacle course. But the teams receive only a vague warning about the requirement of this course. They don’t really know what to spend their limited time and driving energy on, and the vehicles in this episode are mostly too heavy to complete the track. Only two out of eight robots were able to complete the course.

The show’s judges and the ubiquitous host are all a little too eager to nudge non-science viewers with whimper-worthy puns and college physics explanations. And they abuse the awkward phrase â€œbakersâ€ – which sounds less like the concept of the series than the cookie-making staff at Epcot Center.

None of this is enough to distract me from occasional viewing of the show, and the hosts are shameless that it is all ironic. But engineering-conscious viewers should expect to cringe at least once per episode.

I watched a parcel bad reality TV, and I’m not sure I was more pleasantly surprised with a new series – I hadn’t heard anything about this one beforehand. Still, I don’t want to overstate the show, especially given its first season hiccups.

But if you already have access to a paid Netflix subscription (somehow), I see no reason not to put the first episode of this series in the background to see if that appeals to you, too.

The first six episodes of Cooking not possibleThe first season of is currently live on Netflix. Its last two episodes will go online on Wednesday, October 13.

All Pythonistas should switch to Go … or okay, maybe just half