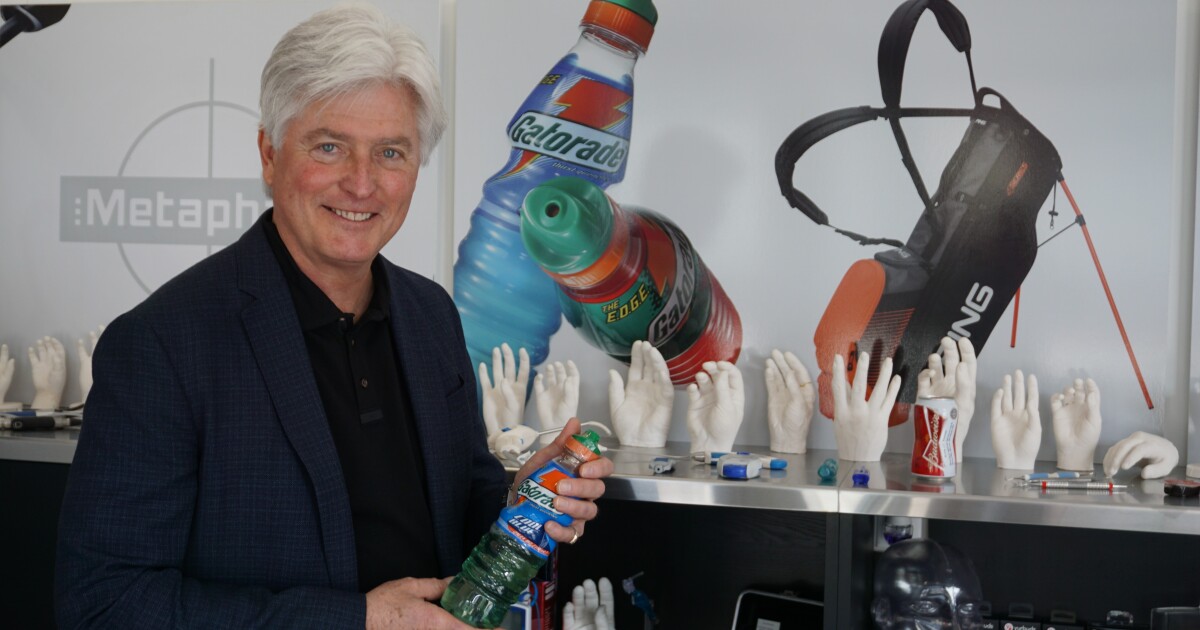 Research shows that it takes athletes an average of seven sips to quench their thirst. They take three big sips, then three small sips followed by a pause – then one last small sip before letting out an audible sigh of satisfaction. These seven sips equal approximately 24 fluid ounces.

We have Bryce Rutter to thank for this information. Rutter is the founder and CEO of Metaphase Design Group, a small St. Louis-based company that has worked with some of the most recognized companies in the world.

Rutter’s research on the thirst quencher was conducted for Gatorade in the late 1990s. Gatorade wanted a new sports bottle, so Rutter and his team followed athletes in 12 sports. They determined that Gatorade needed a larger sports bottle with 24 ounces instead of 20 and a different orifice that mimicked the shape of a month.

“[Gatorade] reported in the media in the first year that they increased their revenue by 25% just because of the bottle design,” Rutter explained Monday. Saint Louis live. “He had an outward appeal and he started jumping off the shelf.”

Metaphase is also behind other recognizable products. They redesigned the iconic red Solo Cup and created the Heinz Dip and Squeeze Packet and Microsoft’s first ergonomic mouse.

But for all those popular products they’ve worked on (also: Harry’s razors and Budweiser’s bow tie box), consumer products only make up 30-40% of his business. The majority of what this 15-employee company works on is in the medical field with surgical instruments, systems, disposables and more.

Whether it’s a surgeon’s instrument or a toothbrush, the ergonomics of hand-intensive products are at the heart of Rutter’s designs.

“That’s kind of the DNA behind everything we do is understanding how we can design something that works the way you and I think, feel and behave,” Rutter said. “I was crazy enough to spend three years in college studying hand function. And there are so many things you can do with your hands.

Rutter and his team consider countless handles, sizes and textures when designing a product. This is evident in the company’s recent toothbrush research for Colgate, where people are recruited to visit a bathroom lab at the Metaphase office in Midtown St. Louis.

Metaphase researchers film people brushing their teeth, then look into the video.

“The fun part is you dissect the whole video and start watching how they flip the toothbrush, when they go bottom to top. There’s a bit of a dance in there with your fingers. So, let’s -we make that rolling or that rotation a little bit easier for someone, especially someone who’s like my 95-year-old mom with compromised hand function,” he said. “Because if we can get one that’s easy for her, it’ll be easy for everyone, and to make sure it’s worthy, in that it doesn’t look like a medical device. It’s something I would like to own.

“Saint Louis live” tells you the stories of Saint-Louis and the people who live, work and create in our region. The show is hosted by Sarah Fenské and produced by Emily Woodbury, Kayla Drake, Danny Wicentowski and Alex Heuer. Jane Mather-Glass is our production assistant. The sound engineer is Aaron Dorr.