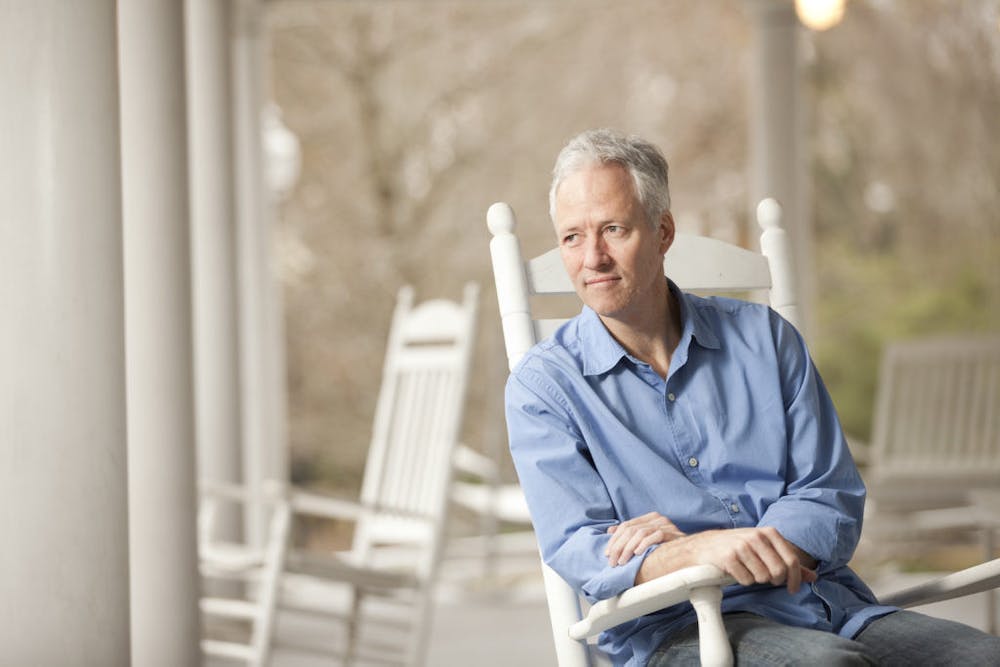 From the depths of his self-proclaimed “pillow box,” John Biewen records his narration in the guest bedroom of his Durham home. It is March 2020 and the WUNC 91.5 studio where Biewen usually records his podcast has been closed due to the coronavirus pandemic.

Biewen is five episodes away from the fourth season of his famous podcast “Radio scene.“

Surrounded by pillows, Biewen sits in his impromptu home studio, creating the twelve-part series that will become his second George Foster Peabody Award nomination in May 2021.

This season, “The land that has never been, reassesses the political foundations of the United States and analyzes the voices that are often overlooked in the history of the nation. Through interviews with leading historians, Biewen questions whether the United States was ever truly a democratic nation.

Biewen came to Duke in 2001 after working as an audio reporter for Rocky Mountain West of National Public Radio and American RadioWorks. Through his work, he established links with the Center for Documentary Studies.

At the time, CDS did not have an audio documentary program. CDS told Biewen they would provide office space while he worked on creating a new audio program.

“I created a new job for myself,” Biewen said.

Biewen joined CDS as a full-time Audio Director in 2006. In addition to teaching undergraduate and graduate courses in audio documentaries, Biewen says creation has always been part of his job.

For years he produced work for the North Carolina public radio system, but gradually became frustrated with what he called the “gatekeepers” of the broadcasting industry. Biewen said public radio had limits on the length of work and acceptable formats for broadcast, and he felt those limits held back some of his creative ideas for new audio works.

Podcasting presented an opportunity for creative freedom without time or restrictions, Biewen said. The podcasting industry has grown considerably over the past few years, with a about 116 million Americans listen to podcasts every month.

In 2015 he started “Scene on Radio” via CDS. Biewen says the podcast gave him full editorial control, but presented an audience challenge. Little did he know that six years later, “Scene on Radio” would attract millions of listeners around the world and two Nominations for the Peabody Awards.

The George Foster Peabody Awards program recognizes innovators and storytellers for their artistic works and dedication to improving social issues. The program was created in 1940 by the National Association of Broadcasters to recognize exemplary radio broadcasts. Today, awards are given for excellence in news, entertainment, documentaries, children’s programming, education, interactive programming and public service.

Get The Chronicle delivered straight to your inbox

Subscribe to our weekly newsletter organized by an editorial. Cancel anytime.

“Scene on Radio” explores a variety of American experiences through diverse perspectives. Biewen hosts and produces the podcast, often bringing in guests and co-hosts. Over the podcast’s four seasons, he racked up coverage by The Today Show, Salon, Vulture, and The Guardian, among others.

In the second season of “Scene on Radio,” Chenjerai Kumanyika, professor of journalism and media studies at Rutgers University, joined Biewen to discuss whiteness in America. The episode, “Seeing White,” was nominated for a Peabody Award in 2018.

Biewen and Kumanyika have collaborated again for “The Land That Has Never Been Yet”, which airs from January to June 2020. The title is borrowed from Langston Hughes’ poem, “Let America Be America Again”.

Biewen says that a constant theme that ran throughout the series was the relationship between democracy and capitalism.

“We are used to seeing capitalism as one of the great forms of freedom in our country,” Biewen said, but it turns out that “even the founders of the United States in the 1780s saw democracy as being in somehow in conflict with capitalism. “

According to Biewen, political leaders in the United States had to “restrict” democracy to some extent in order to maintain the capitalist structure of the country. He says even some of America’s most powerful figures exhibit anti-democratic leanings.

The podcast explores questions such as “What problems were the constitution makers trying to solve?” To “How does objective journalism play into the failings of American democracy?” “

In addition to provoking thought and answering somewhat impossible questions, Biewen faced another challenge for the production of his podcast: a global pandemic.

When COVID-19 hit in March 2020, Biewen had thankfully already conducted most of the interviews needed for his twelve-part series. He says items from the podcast that required travel and were said to have been shut down by the pandemic had already been recorded. The remaining interviews he was able to do virtually.

For Biewen, working from home was no setback. Its state-of-the-art microphone combined with its pillow fort provides a semi-soundproof space that mimics a studio setup.

Biewen and Kumanyika produced the last two episodes of their podcast during a national movement for racial equality and police reform. George Floyd was assassinated by former Minneapolis cop Derek Chauvin on May 25, 2020.

While they were unable to immediately tackle Floyd’s murder and the racial justice movement that followed, Biewen and Kumanyika felt compelled to speak up about these issues and posted a bonus episode around the 2020 elections which connected the themes of the previous season.

At the height of the protests against racial injustice in the summer of 2020, many white Americans wanted to learn about racial privilege and systems of inequality. Biewen says that episodes of all seasons of “Scene on Radio,” but in particular of “Seeing White,” have been downloaded over five million times during the summer of 2020.

In addition to gaining a mass of followers, “The Land That Has Never Been Yet” also received a 2021 Peabody Award nomination in the Podcast and Radio category.

Although “The Land That Has Never Been Yet” was not shortlisted for an award in 2021, Biewen and Kumanyika are honored to have been nominated for the award. Their podcast provided a platform for various stories to be heard as listeners reconsider America’s founding principles and demands for democracy.

For Biewen, it is important for listeners to understand that just because the United States was formed as a turning point towards democracy, individual liberty and liberty did not progress for all directly after the founding of the country.

“The country only became more democratic to the extent that it did so because the people struggled and struggled,” he said. “It took the civil war, the civil rights movement of the 1960s [and] the women’s suffrage movement ”among other historic movements to bring the country closer and closer to democratic principles.

“The Land That Has Never Been Yet” can be found on the Center for Documentary Studies website as well as on Apple Podcasts.