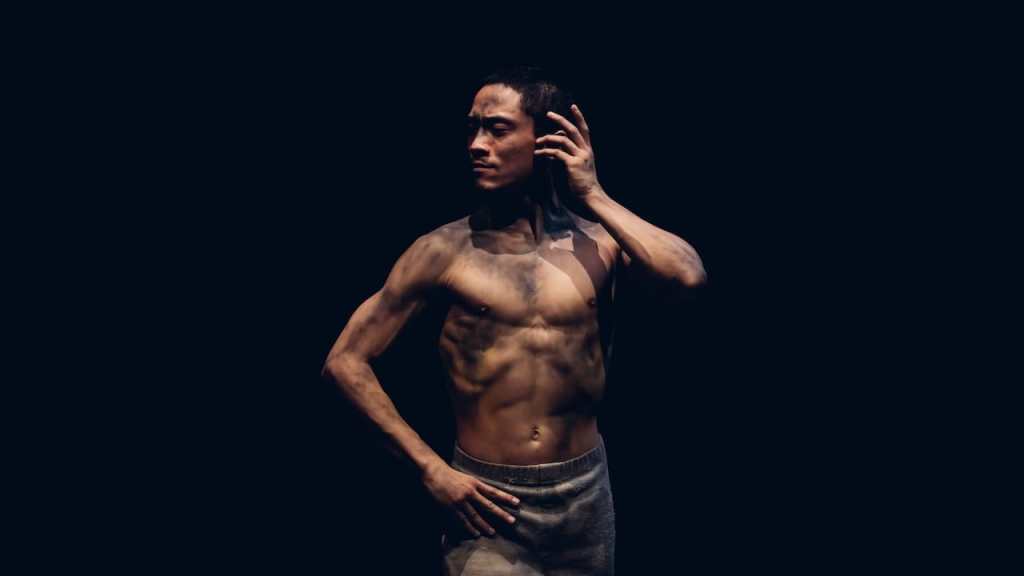 Director Asif Kapadia does a deft job of Akram Khan’s ballet in Creature, which had its world premiere at the BFI London Film Festival. Based on Khan’s original concept and choreography, the English National Ballet Production is produced by Uzma Hasan for Little House Productions and brings intense cinematic sensibility to dark story exploring power, nature, connection and more.

Center stage as the creature is the extraordinary Jeffrey Cirio, who later starred in the stage production which was delayed due to the pandemic. He twists and weaves its way across the set with a performance that is both animalistic and tenderly human. The setting is an old arctic research station, where Creature was brought in to be experimented on by a doctor (Stina Quagebeur). A housekeeper, Marie (Erina Takahashi), catches his eye, as well as that of the Major (Fabian Reimair), a stern presence in a swoosh military coat. As Creature and Marie grow closer, the peril increases.

Parallels with Mary Shelley Frankenstein are clear, and the story is also inspired by the tragedy of Georg Büchner Woyzeck, about a soldier stationed in a provincial town. But there’s also an apocalyptic sci-fi aspect to it: there’s a suggestion that this might be one of the last habitable places on earth, and that Creature’s resilience to harsh environments might hold the key to survival. The characters sometimes point to the sky, suggesting that an alien planet is their only hope.

While the set-up is clarified by reading the film’s synopsis, the diverse cast and crew do a terrific job of communicating the story through expressive choreography and acting as well as directing, l lighting, editing and sound. Although neither performer speaks, the occasional whispered phrase is heard in audio, performed by Andy Serkis, and the film opens with audio of Richard Nixon’s phone call to Neil Armstrong and Buzz Aldrin after they land on the moon. Images of space travel flit through the frame, and the screen flickers as Creature suffers painful episodes. As for the contemporary score by Vincenzo Lamagna, it reflects the uneasiness of the characters and at one point pays homage to Ravel’s “Bolero”, as if only precious pieces of a harmonious past remained.

Despite the unique theatrical set, Kapadia and cinematographer Daniel Landin take bring us closer to the characters than would be possible in a theater, and that’s where the film of Creature really makes sense. Close-ups of the performers’ faces help color their characters and emotions, from Creature’s adoration of Marie to the Doctor’s confrontational reaction to the Major’s behavior. Meanwhile, Mary is a tragic figure who invites sympathy and whose moments of joy are sure to be short-lived. As the Major’s actions escalate, the story invites reflection on power dynamics, intimidation, abuse, and moral responsibility.

Creature is a bittersweet love story that allows the viewer to fill in the blanks with their own imagination. While clearly aimed at a thoughtful arthouse audience, it succeeds in making dance accessible and intimate. As for theaters in February, Kapadia may well achieve its goal of bringing new audiences to dance, as well as ballet fans to cinema.