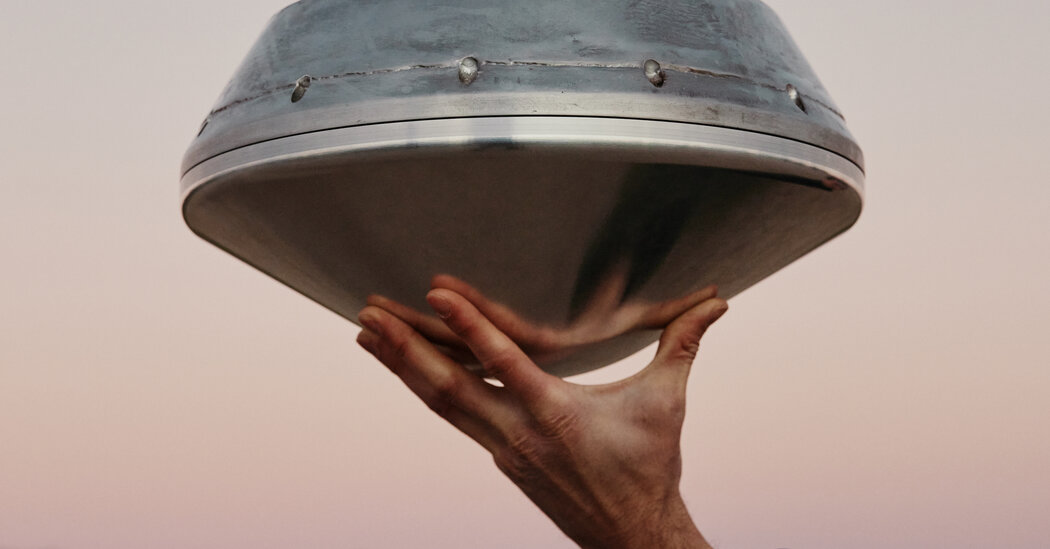 Dreaming about suitcases in space

LAKE ELSINORE, Calif. — The mission to turn space into the next frontier for express delivery took off from a modest propeller plane over a remote airstrip in the shadow of the Santa Ana Mountains.

Shortly after sunrise on a recent Saturday, an engineer from Inversion Space, a barely one-year-old startup, launched a flying saucer-like capsule through the open door of a plane flying at 3 000 feet. The capsule, 20 inches in diameter, somersaulted through the air for seconds before a parachute deployed and uprighted the container for a slow descent.

“It took a while to open,” said Justin Fiaschetti, the 23-year-old general manager of Inversion, who anxiously watched the parachute through the viewfinder of a long-lens camera.

The exercise resembled the work of amateur rocket enthusiasts. But, in fact, it was a test for something more fantastic. Inversion builds capsules in Earth orbit to deliver goods anywhere in the world from space. To make this a reality, the Inversion capsule will pass through Earth’s atmosphere at approximately 25 times the speed of sound, making the parachute essential for a smooth landing and undisturbed cargo.

The inversion is betting that as it becomes cheaper to fly in space, government agencies and corporations will not only want to send objects into orbit, but also bring objects back to Earth.

Inversion aims to develop a capsule four feet in diameter carrying a payload equivalent to the size of a few carry-on suitcases by 2025. Once in orbit, the capsule could, the company hopes, head to a station private commercial spacecraft or stay in orbit with solar panels until called back to earth. When it was time to return, the capsule could leave orbit and reenter the atmosphere.

The capsule would deploy a parachute to slow its descent and land within tens of kilometers of its target location. The company has planned a smaller demonstration capsule with a diameter of 20 inches which will be ready by 2023.

If Inversion is successful, it’s possible to imagine hundreds or thousands of containers floating in space for five years, like (really) distant storage lockers.

The company’s founders envision the capsules could store artificial organs that are delivered to the operating theater within hours or serve as mobile field hospitals floating in orbit that would be sent to remote areas of the planet. And one day, a shortcut in space could allow incredibly fast deliveries, like delivering a New York pizza to San Francisco in 45 minutes.

The founders of Inversion think what appears to be a pipe dream could become more realistic as launch costs drop from current prices, which start at $1 million (and increase by weight) to share the space on a SpaceX rocket. Inversion declined to give an estimate of the cost of its capsules.

“The big hurdle that everyone in the industry is trying to overcome is that at current costs, there just isn’t a lot of demand to do a lot in the space,” said Matthew C. Weinzierl, a professor at the Harvard Business School which has published research. on the economic potential of space.

For decades people have imagined living and working in space as an extension of life on Earth. This vision sounded like a Hollywood fantasy until an influx of private rocket companies dramatically reduced the costs of accessing space, making commercial activity beyond Earth more feasible.

The cost of launching a kilogram, or about 2.2 pounds, of payload into space has dropped by about 90% over the past 30 years. SpaceX is expected to lower costs further with Starship, its next-generation rocket still in development. Elon Musk, chief executive of SpaceX, said he expects launch costs for the massive rocket to be less than $10 million within three years, down from the $62 million announced for the launch of the Falcon 9, the rocket widely used by the company.

To make space more accessible than it is today, at a lower cost launching rockets is only part of the equation.

Another important factor is the facilities in the space. Last year, NASA selected three companies to receive funding for commercial space stations as part of a plan to eventually replace the International Space Station. A fourth company, Axiom Space, won a $140 million contract in 2020 to build a habitable module attached to the ISS.

Mr Fiaschetti, who interned at SpaceX before dropping out of college last year to pursue his own start-up dreams, thinks physical assets – not just satellite data – could be sent back from space. space.

Today, the main rocket cargo is satellites that remain in space. Vehicles carrying humans or experiments from space are large, cost over $100 million, and usually operate in tandem with a specific rocket. Inversion said it designed its smallest pods to fit on any commercial rocket so they could fly into space frequently and inexpensively.

What Inversion is trying to do is not easy. Designing a vehicle for re-entry is a different engineering challenge than sending objects into space. When a capsule enters the atmosphere from space, it is traveling at such high speeds that there is a risk of combustion – a huge risk for human travelers and valuable non-human cargo.

Seetha Raghavan, a professor in the Department of Mechanical and Aerospace Engineering at the University of Central Florida, said dealing with the capsule’s heat, vibration and deceleration will be even more difficult as the vehicle’s size shrinks.

“Everything becomes more difficult when you have a small object to control,” Ms Raghavan said.

The inversion project for orbiting capsules raises questions about whether it will contribute to space congestion, already a problem with satellite megaconstellations. And the abundance of satellites interfering with observations of planets, stars and other celestial bodies is a common complaint among astronomers.

But Inversion said it uses materials to make its capsules significantly less reflective to reduce visual pollution. Additionally, the company said its capsule will come with systems to avoid debris and collisions in orbit.

Mr. Briggs, 23, and Mr. Fiaschetti met when they sat next to each other at an enrollment ceremony for freshmen at Boston University. They became active in the school’s Rocket Propulsion Group working on rocket designs. They moved to Los Angeles during the pandemic. One night they were discussing the future of the space industry — “We’re nerds. That’s what we’re doing,” Fiaschetti said — and they focused on creating cheaper re-entry vehicles to transport cargo from space.

They moved into a guesthouse in the San Pedro neighborhood of Los Angeles, each paying $1,250 a month, including the use of a garage that became the company’s workshop. Using Mr. Fiaschetti’s woodworking equipment, they designed and fabricated a working aluminum rocket motor in an effort to prove to potential investors that they had the technical chops needed.

In June, Inversion Space joined Y Combinator, a Silicon Valley start-up incubator known for its early investments in Airbnb and Stripe. Five months later, he said he had raised $10 million based in part on letters of intent worth $225 million from potential customers interested in booking space on Inversion’s capsules. Mr. Fiaschetti declined to identify the customers.

Venture capital started to see the potential of the space. Globally, venture capitalists invested $7.7 billion in space tech last year, up nearly 50% from the previous year, according to data compiled by PitchBook. .

Inversion moved to a 5,000 square foot warehouse in an office park in Torrance. It’s a handyman’s dream shop, complete with machining tools for fabricating parts, welding equipment and a 20-ton hydraulic shop press for packing parachutes as dense as oak.

Nestled in the back of the warehouse — next to a floor-to-ceiling American flag and a basketball hoop — is a 10-foot black shipping container for testing rocket engines and deployment mechanisms. parachute. The structure includes reinforced concrete walls, ceiling sprinklers and a system to replace oxygen with nitrogen in the event of a fire.

During a recent visit, Inversion was preparing to test a new parachute design. Parachutes are tricky. They need to unwind perfectly to ensure that a capsule will slow down and not rock too much. Many factors, such as fabric choice and seam design, can affect the effectiveness of a parachute.

While most rocket companies outsource the design and production of parachutes, Inversion sees building their own parachute as an advantage.

During a previous test, Inversion had noticed that the capsule oscillated a lot. That day, Mr. Fiaschetti, Mr. Briggs and two engineers had arrived before sunrise on a recent Saturday at an airstrip heavily used by skydivers to test a new design.

Connor Kelsay, an engineer overseeing the design of Inversion’s parachute, boarded the plane with the test capsule, which was attached with a GoPro camera and inertial measurement unit to measure its movements. After throwing the capsule out of the plane, he waited a few seconds and jumped after it. An experienced skydiver, Mr Kelsay circled the capsule, filming its movements from another camera on his helmet.

When he lands, he shares the same observation as everyone else: the parachute took a long time to deploy. The team quickly scanned the video and ran through a list of possible factors. Did Mr. Kelsay throw the capsule too hard? Was there a lot of turbulence when the crash happened? Was it because they had used a different shaped capsule last time?

Afterwards, Mr Fiaschetti said he was not disappointed with the slow opening of the parachute as it was part of the process.

“At the start of development, you expect things not to go as perfectly as you wanted them to,” he said. “I guess that’s why they call the hardware ‘hard tech’.”

The most common consumer frauds and how to avoid them