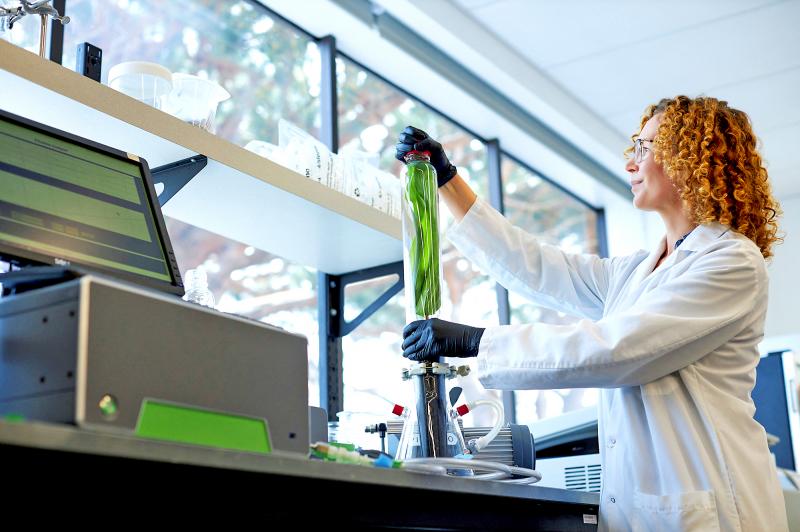 Although largely unregulated, global investment in biostimulants and crop control products more than doubled in the past year and could help farmers reduce their use of nitrogen, which can produce nitrous oxide and pollute streams.

Tech companies are raising hundreds of millions of US dollars, including backing from agriculture heavyweights like Bayer AG, to develop agricultural products that use living things like microbes and algae to feed crops and reduce the need for synthetic fertilizers.

Microbes, including fungi and viruses, have been available for decades as treatments to protect plants against insects and disease, with mixed results.

However, developers are increasingly deploying them as natural ways to nurture crops, while maintaining crop production levels.

Investment bank Rabobank expects the biostimulants industry, valued at $3 billion, to grow 12-15% annually over the next five years.

Global investment in biostimulants and crop control products more than doubled last year from a year earlier, to $777 million, according to preliminary data from venture capital firm AgFunder.

Yet microbial fertilizers are largely unregulated, with few studies on their effectiveness in increasing crop yields. Only a few US states require companies to provide product efficacy data.

The EU aims to impose its first efficacy requirement for biostimulants in July, and the US Environmental Protection Agency has released draft guidelines for public review.

“Unfortunately, there’s an element of buyer beware there,” said Jon Treloar, an agronomist at Denmark-based Novozymes, one of the biggest sellers of organic produce.

One contains a fungus that grows along the roots of plants and releases phosphate – a crop nutrient – from the soil.

“If producers have a bad experience, it can really hurt the whole industry,” he said.

He said the field with Pivot’s product produced slightly more corn per hectare.

“I was skeptical that there was an organic product that would help the crop,” Taylor said. “It’s one that I personally think will work for me.”

Pivot, a private company whose investors include oilseed crusher Bunge Ltd, launched commercial sales of its microbial fertilizer in 2019 and said farmers were using it on more than 404,685 hectares of land.

The microbes in Pivot’s Proven 40 consume the sugar in the roots of a corn, wheat or sorghum plant, producing an enzyme that converts nitrogen in the air into ammonia, a crop nutrient.

“Microbes that can fix nitrogen from the air into ammonia have been the holy grail of agriculture for 100 years,” said Pivot chief executive Karsten Temme.

Pivot’s products do not generate the high emissions associated with nitrogen fertilizer manufacturing, nor the nitrous oxide emissions created when synthetic fertilizers break down over time, Temme said.

Joyn designs microbes in his Boston lab that fix nitrogen from the air and deliver it to corn plants in a form they can use.

Field trials of the treatment in the Midwest, which aim to allow farmers to reduce conventional fertilizer use by 50% while maintaining yields, began last year.

Credits, generated when carbon capture claims are verified, can be sold to buyers seeking to offset their emissions.

The company, which sells its products in the United States and is expanding in Europe, has seen revenue jump 50% or more year-over-year, a growth rate that Locus chief executive Chad said. Pawlak, is expected to continue over the next two years. three years due to soaring farm input costs.

“When you see the double-digit percentage increase in [fertilizer] costs, the conversation around microbes is changing dramatically,” Pawlak said. “We are able to unlock some of these nutrients that have been bound in the soil over decades.”

Fertilizer and seed companies are on board.

Nutrien Ltd sells biostimulants through its agricultural supply stores and Yara International produces biosimulants based on algae and humic substances.

Seed company Corteva is launching a biologic this spring that captures nitrogen from the atmosphere and converts it into ammonium, a fertilizer that plants can use, a company spokesperson said.

However, not everyone is convinced that biostimulants work.

University of Minnesota soil scientist Daniel Kaiser tested Pivot’s Proven product at six sites over the past two seasons with less than optimal nitrogen fertilizer applications and only one site showed improved yield.

“With many of these [biostimulant products] the scientific principles are sound, but taking them from a concept to something that will work in the field is where they tend to break down,” he said.

Europe accounts for half of the global market, according to the European Biostimulants Industry Council.

Farmers there initially used mainly for organic production and on high-value fruit and vegetable crops, but are now increasingly deploying them in conventional crops in response to the EU’s drive to make production more sustainable agriculture.

The global focus on reducing emissions and consumer awareness of how food is produced has given momentum to the biostimulant sector, said Acadia Senior Vice President James Maude.

“It had bad connotations of being snake oil. [Now] it’s like the stars are aligned,” he added.

Comments will be moderated. Keep comments relevant to the article. Remarks containing abusive and obscene language, personal attacks of any kind or promotion will be removed and the user banned. The final decision will be at the discretion of The Taipei Times.