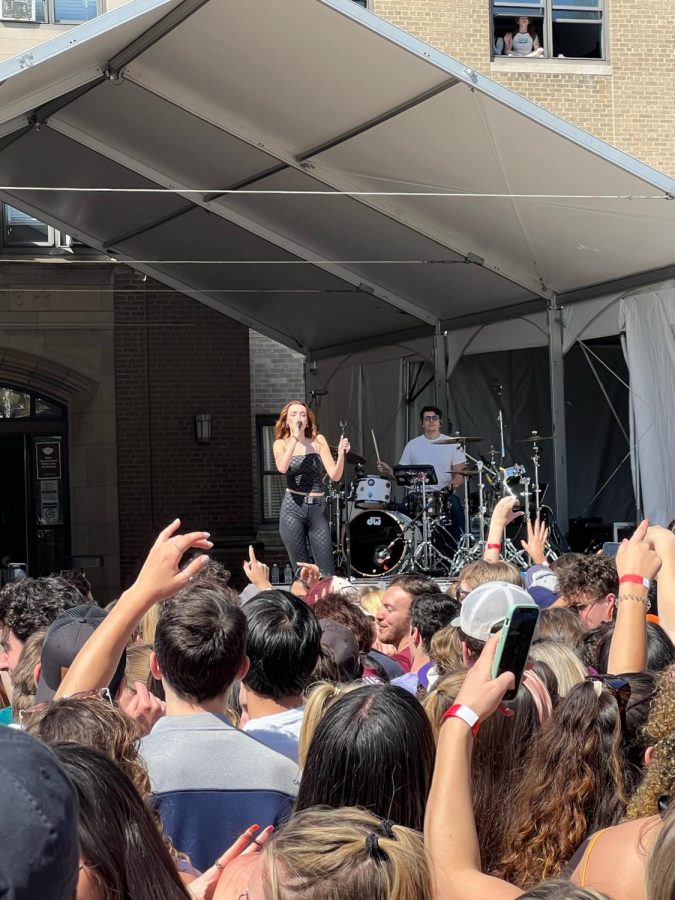 The Fordham Campus Activities Board at Rose Hill (CAB) held free programs throughout the week from April 24 to May 1 to continue the 42-year school tradition of the spring weekend.

Each event was free and open to undergraduate students from the Rose Hill and Lincoln Center campuses. Last Spring Weekend was the first large-scale in-person Spring Weekend since 2019 due to the COVID-19 pandemic. Only this year’s senior graduates remembered a time when the tradition existed before the coronavirus.

“We focused on bringing back a really special campus tradition that the majority of the student body had yet to experience. It was so gratifying to see it all come to life,” said Katie Milinic, Fordham College at Rose Hill (FCRH) ’22 and CAB President.

While the Saturday Spring Concert is the most anticipated event each year, the fun kicked off the previous Sunday with Field Day on Edward’s Parade. An inflatable obstacle course and jousting ring filled the lawn, and students played classic games such as tug of war and water balloon toss.

The fun continued on Monday evening with a huge bingo game. The line of students stretched from the Fordham Prep Theater and wrapped around the University Church. They filled the theater as they competed for prizes like a karaoke machine, an Apple Watch, a Nintendo Switch, an iPad and an Oculus VR headset.

On Tuesday, students packed Rodrigue’s Coffee House for Rodrigue’s last concert of the semester. They listened to music from Spud Cannon, Birthday Girl and Battle of the Bands finalist The Wave.

“I was honored to perform alongside so many talented comedians and Matt Ruane.” Brigid Lynett, FRHR ’22

“I entered because I always wanted a $500 Ticketmaster gift card and I love the attention. It was an opportunity to get both,” she joked of her win. “I was honored to perform alongside so many talented comedians and Matt Ruane. Winning was the thrill of my life.

The week’s events escalated on Thursday as Fordham welcomed its first guest artist for the weekend, Kelsey Kreppel.

Fordham’s own student band Faculty opened the gig and played a mix of covers and their own original songs released late last year on their debut EP.

More than 600 people packed the Fordham Prep Theater to see Milinic interview Kreppel about her career as both a preschool teacher and a comedic Youtube influencer/vlogger. She gave the audience valuable tips for understanding post-graduate life and not being afraid to pursue your passion.

“It was really fun to hear about her experiences in college, but also to hear where she is now and what she’s doing these days,” said Alessandra Carino, FCRH ’23 and participant. at the event. “It was really cool to see Fordham welcome someone like Kelsey. It was a really exciting way for me to experience the Fordham tradition for the first time, even as a junior.

The weekend’s events started strong with a Friday night carnival. Students waited an average of 45 minutes in line to slide on the Fun Slide or spin in the Gravitron. In addition to the rides, people played classic carnival games like balloon darts, ate common carnival snacks like funnel cakes, and entered the raffle for a chance to win. one of 10 three-day tickets to the Governor’s Ball Music Festival.

Saturday marked Fordham’s annual Spring Weekend Concert, the pinnacle of weekend festivities. With the sun making a rare appearance, students flocked to Martyrs’ Lawn in the early afternoon, despite full Ram Vans and no D Train service that day. They took advantage of the food offered at the BBQ as well as food from the House of Cupcakes or Stuf’d food trucks.

Fordham’s own student band Faculty opened the gig and played a mix of covers and their own original songs released late last year on their debut EP.

Christian French followed, playing fan-favorite songs like “Avalanche”, “I Think Too Much” and “Hungover Sunday”. When the alt-pop singer performed his song “OH WELL,” the crowd sang the chorus’ signature call and response along with him while waving their arms back and forth.

People crowd-surfed, started mosh pits and climbed on the shoulders of friends in the hope of catching a glimpse of O’Brien.

The crowd grew steadily throughout the day until a sea of ​​students filled the stage lawn at the sound engineers‘ tent just as weekend headliner Olivia O ‘Brien, came on stage.

According to concert co-chair Gibson Borelli, FCRH ’24, approximately 3,000 students watched Fordham’s first-ever female headliner perform her hit songs like “Josslyn” and “hate u love u.” This estimate does not include the countless students who live in the dormitories of the Court of Martyrs and who have opened their windows to sing in the comfort of their own bedrooms.

The pop singer’s performance electrified the crowd, suddenly transforming the spring concert into a tamed version of Coachella. People crowd-surfed, started mosh pits and climbed on friends’ shoulders in hopes of catching a glimpse of O’Brien, especially after she surprised everyone with a cover of “Your Love is My Drug” by Ke$ha.

Although she obeyed the rules against swearing, she walked to the railings at some point between songs to drink a shot offered by the crowd.

Before the concert, many students wondered how O’Brien could perform his new song, “Bitches These Days,” while following Fordham’s rule that all music played must adhere to Jesuit values.

As she prepared to sing it, O’Brien apologized for the censorship while showing everyone a sign she had been given that read, “Don’t Swear.”

Seemingly in response to this, she received a sign at her concert the next day at Western New England University that read, “Say bad words.”

Although she obeyed the rules against swearing, she walked to the railings at some point between songs to drink a shot offered by the crowd. In response, dozens of other students proudly held their contraband booze in the air and cheered – despite Fordham’s strict policy against it. O’Brien pleased the crowd one last time at the very end of his set by donning a tossed-on-stage Fordham shirt before giving a thumbs up and walking off stage.

After such a hectic Saturday, the spring weekend ended Sunday with a film festival on campus during Edward’s parade. The event featured student-produced films and food from the same food trucks as the day before.

“It exceeded all of my expectations and we saw record attendance at so many of our events,” Milinic said of the spring weekend as a whole. “I’m so grateful that we were able to provide these experiences and allow students to create memories on campus that they can look back on after leaving Fordham.”

Bonnie Carroll, FCRH ’25, summed up the sentiments of most students well in an Instagram caption that she linked to her snap of the spring weekend: “Spring weekend was fun, but now it’s time to die during the finals.”