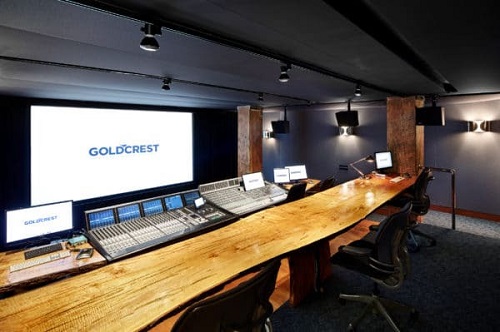 “We are committed to providing producers with the resources they need to meet today’s demanding delivery requirements” says General Manager Domenic Rom. “Our stages offer the latest tools to produce rich and immersive soundtracks in an intimate environment that promotes collaborative mixing. “ Goldcrest Post has already delivered several projects with Dolby Atmos sound, including the HBO Max series Gossip Girl and the Apple TV + documentaries Who are you, Charlie Brown? and dads. by netflix The Queen’s Gambit, which recently won an Emmy for sound editing and mixing, was also mixed at Goldcrest’s Studio Q.

Studios Q and A are each equipped with two Avid S6 consoles supported by ProTools workstations, MADI routers, 2K NEC projectors and Dolby Atmos Mastering Suite. Immersive monitoring includes a mix of JBL and Meyers Acheron studio speakers. In addition to Dolby Atmos Home Theater 7.1.4, the stages support mixing in Dolby 7.1 and 5.1. “The two rooms are equipped in the same way and offer a cohesive mixing environment”, said the engineer Bob troeller. “The workflows are designed for maximum efficiency. Each room has a dedicated Pro Tools recorder and a Dell server running Dolby Atmos Home Theater software. This allows all dialogue, music and sound effects deliverables to be recorded simultaneously, helping to streamline the delivery process.

The upgrade is part of Goldcrest’s plans to grow its audio and video resources to keep pace with increased streaming and broadcast TV production. “We have a lot of big projects internally and others are in progress” Notes Re-recording mixer Bob chefalas. “We believe that the demand for Atmos delivery will continue to increase, and we are ready for it.”

The establishment’s new resources have already aroused an enthusiastic reception. “Everyone agrees that the rooms sound good” declares the director of the audio department Nicole tessier. “We have also improved our conversational capabilities which improve interactions between our remote clients and the mixers. We have had great success with remote sessions using ClearView and Source Connect Pro X.