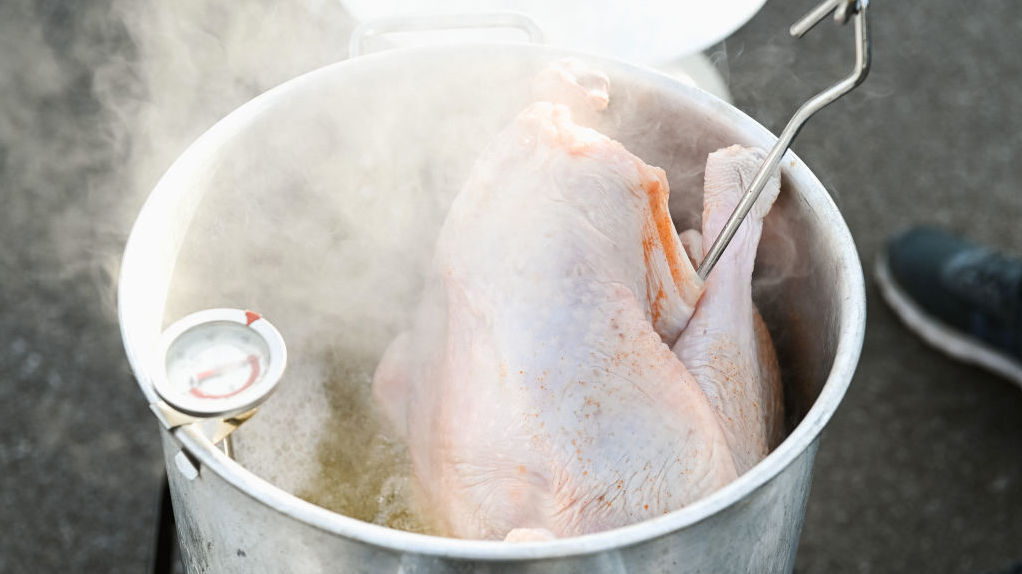 While a thermometer will tell you if the oil is hot enough for frying, scientists say the sound a wet chopstick makes when dipped in oil will be too.

While a thermometer will tell you if the oil is hot enough for frying, scientists say the sound a wet chopstick makes when dipped in oil will be too.

Thanksgiving is almost here and, maybe, you are planning to brave the fryer.

But how do you know when the oil is ready?

Fluid dynamics researchers have a tip: use your ears.

Scientists took inspiration from a classic cooking hack, used to test tempura frying oil. You wet the sharp end of a wooden chopstick, stick it in oil, and listen.

“If you hear very loud crackles or crackles, it’s probably too hot,” said Tadd Truscott of King Abdullah University of Science and Technology in Saudi Arabia.

“And then if you can’t hear anything, it’s usually too cold.”

What if the oil is right?

â€œThen there’s a kind of pretty bubbling sound. [It] almost sounds like a song to some people, as it was once described to me, â€Truscott said.

He and his team wanted to see what types of bubbles form at different temperatures, and how those bubbles, in turn, create that sizzling â€œsongâ€. So they repeated the test of the chopsticks at different oil temperatures, ranging from 150 to 210 degrees Celsius, while recording high-speed audio and video.

Truscott collaborator Rafsan Rabbi of Utah State University said that when you dip a wet wand in hot oil, the water begins to vaporize and form water bubbles that rise to the surface. . Air bubbles also form.

The researchers also said that the wooden chopsticks work best for this experiment, as they may contain some water for the test. And no matter how big and chunky they were, the chopsticks were all about the same size at the pointed end.

So why is this important? Well, the phenomena they’re studying go way beyond the fryer, Truscott said.

â€œIn fact, even in your car, whenever there is a combustion, a lot of these same behaviors occur. And so all of this is important in our daily life. We just don’t realize it. behind the scenes .”

OK, real world apps are great. But how many cooks have seen their work?

Contributor Akihito Kiyama, a postdoctoral researcher at the state of Utah, admitted a little timidly that he was living with his expert.

â€œYes, Aki’s wife was our leader,â€ Truscott added with a laugh.

Kiyama goes present the results of their study next week in Phoenix, Arizona at the 74th Annual Meeting of the Division of Fluid Dynamics.

No word yet on how many fried chefs will be there.