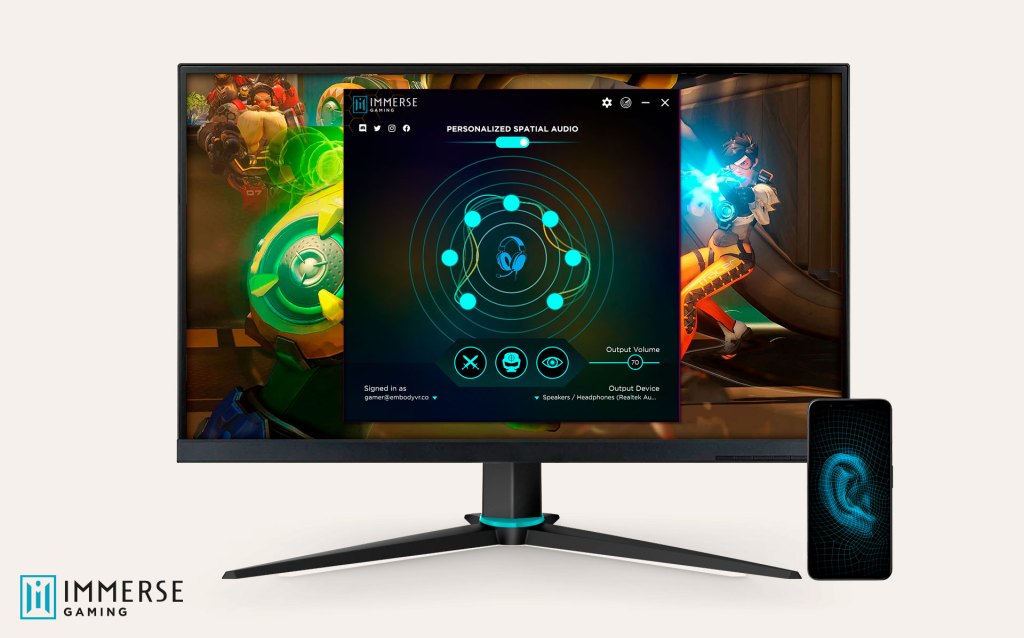 The concept of tweaking in-game audio to bring out an advantage in shooters has been around for at least a decade. The companies have different names for it – Superhuman Hearing, Footsteps, an FPS mode – but they’re built around the idea of ​​toning down big, beefy sounds and cranking up the more subtle volume.

It allows players to hear the footsteps of an opponent crawling behind them as they shoot across the battlefield. In the middle of the shootout, they can pick up the sound of reloading so they can rush at an enemy. It’s become standard on the majority of high-end gaming headsets, but the technology hasn’t changed since.

This is where Immerse Gaming comes in. This is not a new device or any adapter. It’s a new kind of software that harnesses the power of artificial intelligence and neural networks to create a personal preset for gamers. All players do is take an image of their right ear on a smartphone and send it for analysis. After a few minutes, the technology models a player’s ear, according to Marielle Jakobsons, vice president of creative direction and production at Embody, and uses algorithms to simulate “how sound diffracts from folds and cavities. from your ear and enters your eardrum. “

It creates a personal HRTF, or head-related transfer function, which tailors the sound to the players’ distinctive ear shapes. To ensure that the HRTF preset works as intended, Immerse Gaming is tuning the technology with specific gaming headsets. If gamers own a HyperX Cloud II or Razer Barracuda X, they will choose this option to ensure that the hardware and software work together to produce the best sound.

IMPROVED IMMERSION
The result is Superhuman Hearing on steroids. With sound tuned to a player’s ears and headphones, the software enhances immersion. While most surround sounds let players know the direction of the shots or the slipping of the boots on the ground. Immerse Gaming adds a layer of distance. Thanks to the nuances of the sound, players find out how far away the audio signal is.

By activating and deactivating the Immerse plug-in, there is a remarkable difference in the audio. Without it, surround sound feels like it’s above the players. When an NPC speaks, it feels like they are yelling at players directly into their ears from a certain direction. With Immerse enabled, players get an idea of ​​how far away this source is. It’s easier to pinpoint.

This is the most obvious and useful change in sound, but Immerse offers other useful tweaks as well. It lowers the sound of music and increases the mids and treble. Sounds such as the echo of gunshots are more pronounced than the low bass of a gunshot. Environmental sounds such as flickering flames are enhanced, giving players better situational awareness. They will know where the danger is.

GAME-BASED SETTINGS
The software has three different modes depending on the type of game. Most of the time, players will use the one in FPS titles which offers a good feeling of distance between sound sources and the ear. Awaken creates a wider soundscape, which is best used for MOBAs or MMORPGs. Close Combat mode is intended for racing games and role-playing games and makes the sound of danger close, but with the bass muted and the mids and treble increased, the sound is more high-pitched and less powerful, but the subtle sounds are improved.

Additionally, there is a Sonar overlay that shows players where sounds are coming from. If hearing an enemy coming isn’t enough, seeing the direction of the sound source adds another important piece of information. It works so well that it looks a bit like cheating because you have a major advantage in knowing where an enemy is coming from.

The plug-in was not detected by anti-cheat software in a few games I’ve played, so it appears to be kosher for competitive games. It is not certain that this will be the case for future titles, but obviously Immerse Gaming software would be banned from tournaments.

Nonetheless, it’s a fascinating product that gives players an edge over some titles. The cost of the service is $ 14.99 per year and it comes in four flavors suitable for different brands and helmets. Ideally, it’s software for competitive gamers who have all the basics covered – they’ve got a great gaming headset, keyboard, and mouse – and just want another edge on the battlefield.

75 years ago, a Nazi rocket took the first photo of Earth from space

‘Suave’ – a podcast from Futuro Media and PRX – wins Pulitzer…