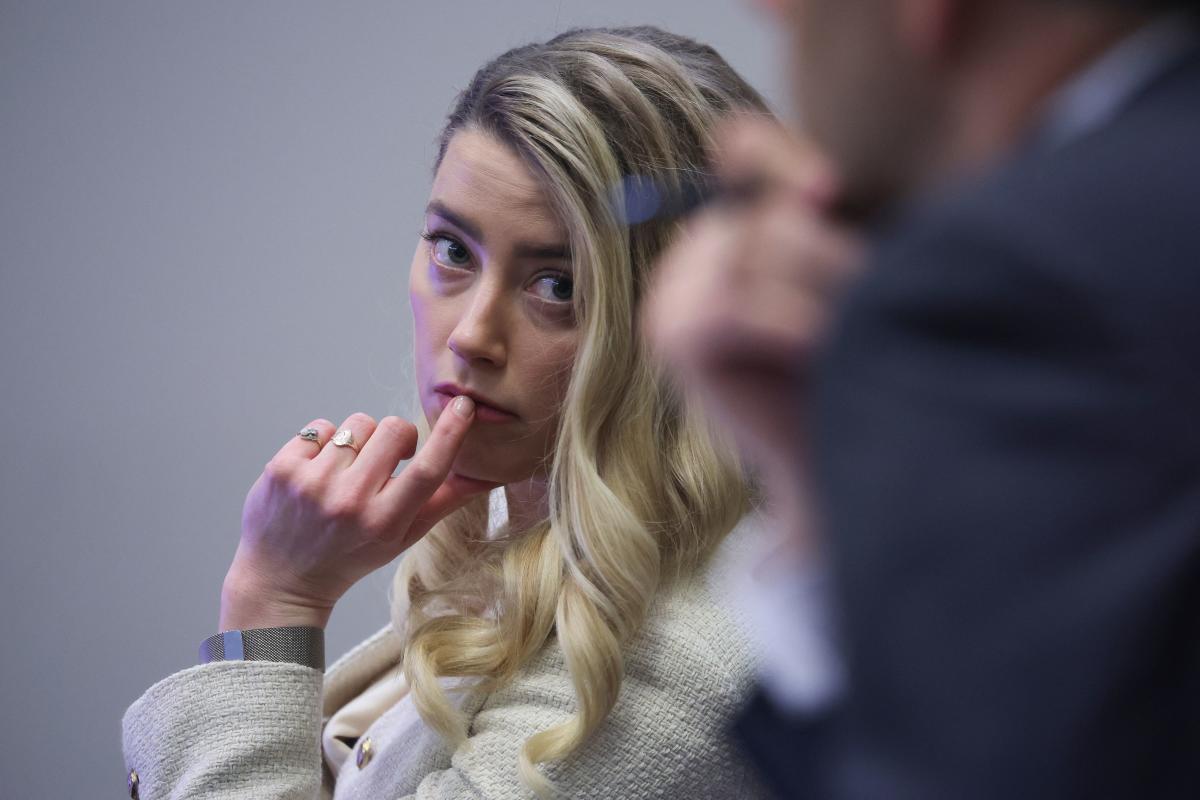 Johnny DeppTestimony continued Wednesday afternoon with further explosive revelations about his marriage to Amber Heard. After lunch, the 58-year-old returned to the stand and detailed the multiple times he was allegedly abused. During the “staircase incident,” the actor claimed Heard “roundhouse” punched him in the cheek.

“[Amber’s sister] got in front of Amber, facing Amber, to stop Amber,” he alleged.

The court then heard a recording of Heard and Depp arguing in which she admits to getting into “a physical fight” with the actor.

The actor opened up about another fight Heard allegedly instigated when she started “scratching” Depp in December 2015. He admitted to trying to “hold her down” and that there was “an accidental contact, but not a whim” as she claimed.

“There was a kind of contact with our heads, with our foreheads, like you would when you try to calm someone down like that,” Depp said. “That’s when she accused me of headbutting her and breaking her nose. There was no blood. I didn’t hit her nose.”

Depp said he pulled out and Heard walked into the room a few minutes later. The actor said he went into “appeasement mode” and demanded to see his alleged injury, but she wouldn’t show it to him. When Heard got rid of the Kleenex she was holding to her nose, Depp said he picked it up “in the trash” and realized “it was nail polish,” not blood.

Depp testified to two other volatile incidents, one on his birthday in April 2016 — which he says resulted in the spilling of human feces in their marital bed — and a final fight on May 21, 2016. is the last of 14 times Heard claims she was abused. However, that night Depp said he was 20 feet from the actress when she put on a performance and claimed she was hit by the actor.

“That was the last time I saw Ms. Heard until she asked me to break the restraining order…and speak to her in July later,” Depp said. He did not specify.

Another recording was played of Heard telling Depp, “I hope Jack’s stepfather teaches him more about being a man” as the actor was not one. Depp testified Wednesday about Heard’s “non-existent” relationship with his two children, revealing that his daughter, Lily-Rose, wouldn’t even come to their wedding for “many reasons.”

When asked how often Heard got his two kids to fight, Depp replied, “Too often.”

“My kids are a lot smarter than me and they… refused to be around her anymore,” he explained. “They didn’t like the way she treated me, which was written in a very elegant letter from my daughter to Mrs Heard.”

Depp learned of Heard’s domestic violence allegations on May 27, 2016 “which is, in fact, my daughter’s birthday.”

“I had seen that she had gone to court (…) there were paparazzi everywhere,” he said, calling an apparent “mark” on her face. “It also happens to be the day when Alice in Wonderland 2 opened and that was the day she chose to go to the courthouse to get a TRO, a temporary restraining order, against me.”

Asked what impact the allegations had on him, Depp replied, “I felt sick…there was no truth to it.” He said he was “very confused” and “very hurt” by Heard’s “betrayal”.

“I don’t know if she just wanted me to be erased, or die, or just let me stay and allow her to mess up my life for a while and go out of her way to shame me and hurt my kids,” he added, saying the charges “controlled every second I was awake.”

Heard and Depp settled their divorce in August 2016. According to the actor, he “wanted to fight it” because his abuse allegations were false. But he agreed to settle on the advice of his legal team. The couple released a joint statement at the time:

“Our relationship was intensely passionate and at times unstable, but always bound by love. Neither party made false accusations for financial gain. There was never any intent to physically or emotionally harm. Amber wish the best for Johnny in the future.”

Heard’s legal team briefly began its cross-examination late Wednesday and is focusing on the words the actress wrote in her op-ed, which is why the actors are in court.

“I’m suing her for defamation and the various falsehoods she used to end my life,” Depp said.

However, Heard’s attorney, Ben Rottenborn, argued that “the opinion piece contains no details about your time together.” He also pointed to the joint statement Depp signed during their divorce settlement, which said “neither party made false accusations for financial gain.”

In his short 20 minutes, it’s clear that Rottenborn – whose name Depp has repeated several times – intends to make the case that the actor’s career was in a tailspin long before the op-ed was published. Depp will return to the stand on Thursday where cross-examination will continue.