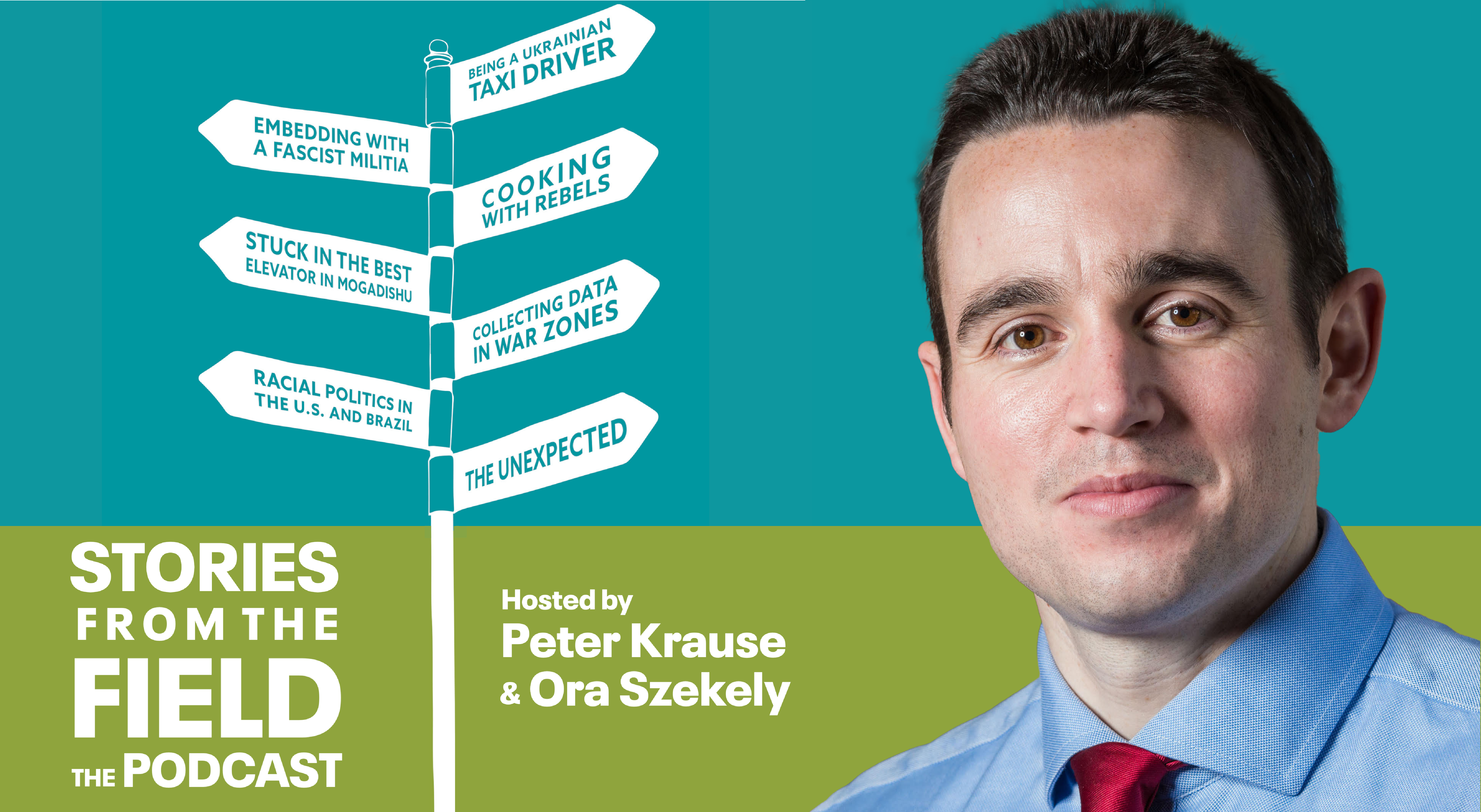 Boston College students interested in politics have access to an abundance of resources and opportunities to learn directly from faculty, but the majority of the general public do not share this privilege. There is also a lack of accessibility on the faculty side – many academics who spend years working in the field often struggle to find ways to share what they have learned with the public.

Peter Krause, associate professor of political science, has found a way to bridge this gap: his podcast, Stories from the Field: A Guide to Navigating Political Science Fieldwork, allows those researching the field to talk about it in a dynamic and informal way for those interested in hearing their stories. Released from January 2021, the episodes feature professors and student researchers from around the world who wish to share their experiences and give advice to aspiring students and researchers.

Coming up with the idea for his podcast wasn’t a quick process, and neither was Krause’s journey into political science, he said. Krause grew up in a suburb of Hartford, Connecticut and attended public school. When he was in high school, the story caught Krause’s attention.

â€œGrowing up, I was always very interested in history,â€ Krause said. â€œIt was my favorite subject in school. In fact, I did not take political science classes before university.

As an undergraduate student at Williams College, Krause was finally able to apply his interest in politics to an academic setting by taking political science courses.

“I think I’ve always been very interested in politics and the political background, especially international relations and foreign policy, you know, how countries relate to each other, why they choose to do the peace with each other or go to war, â€he said. .

As he explored this interest, he also discovered his broader career goals. His dedication to political theory is not just to learn war games, but rather so that he can share what disrupts society in order to help prevent it in the future, he said. .

“And then certainly, like maybe a lot of BC students, I also have some interest – in the most naive sense – in trying to make the world a better place,” Krause said.

In the broader field of political science, Krause was particularly interested in the study of the Middle East and its relations with the United States.

“The United States plays a disproportionate role in the politics and the lives of many people in the Middle East, but I think a large portion of the American public and even policy makers do not have a great understanding of this region,” Krause said. .

Krause knew he was interested in teaching after college, but after his freshman year he interned at an investment bank to explore the financial field.

In that role, Krause worked at the World Trade Center in August 2001, which had a huge personal impact on his life, he said. This pushed him even further to focus on US-Middle East relations after observing the fallout from the 9/11 terrorist attacks.

After finding out that he wasn’t keen on working in investment banking, Krause changed course after graduating from Williams College in 2002. He became professor of history at Thornton. Academy, a private boarding school in Saco, Maine.

â€œI could have been a high school teacher for the rest of my life and been happy – it’s a great job,â€ he said. â€œYou really feel like you can make an impact on the lives of many students, and I really enjoyed that. ”

Despite his affection for high school education, Krause realized that one of his biggest interests was research, a goal possible only at a large university. In 2005, Krause was accepted to the Massachusetts Institute of Technology, where he obtained his doctorate. in political science and government and learned to conduct proper research and become a rigorous thinker and knowledge producer along the way, he said. While at MIT, Krause applied for a job at BC.

â€œTo be honest BC is a dream job for me,â€ said Krause. “I can’t think of a school I would rather be in.”

Krause has taught a variety of classes, but said he particularly enjoys his classes on political violence and terrorism in the Middle East, which were not offered until Krause’s arrival. It has been taught for about ten years.

“I think a lot of students – and I know this because I was one of them – find methods lessons very dry and / or intimidating, and the text for them can make your eyes glaze over.” , Krause said. â€œI wanted something that was the opposite of that.

Stories from the field, which was published in book form in 2020, provides an unorthodox guide to navigating the field in political science, Krause said. It features 44 political science professors from around the world who share their research experiences on a global scale.

“It’s not necessarily a drier, more abstract methods book,” Krause said. “It’s more:” Let me tell you a story about that time when I was, you know, interviewing someone in that refugee camp, or when I was working in the archives in London. or in Algeria or elsewhere and that I came across this document. “‘”

Before COVID-19 hit, the idea of â€‹â€‹turning these stories into a podcast had crossed Krause’s mind, but he was much more focused on research, he said. But with the pandemic slowing research, Krause and colleagues considered doing more with it. Stories from the field. After speaking to other professors and scholars specializing in Middle Eastern studies, Krause saw so much knowledge in their collective experiences, but no way to share these stories – this is where his podcast was born.

The production team has 13 episodes planned, each featuring writers, professors or students sharing their experiences. The main purpose of the podcast was to answer general questions about the ethical and logistical challenges of conducting field research away from home, Krause said.

Krause said hearing stories about how other people overcome the challenges of policy research can be the most informative and valuable asset for graduate students and young faculty.

One episode, titled â€œResearch in China with Enze Han and Robert Ross,â€ deals with structural complications in authoritarian states like China that make it nearly impossible to conduct in-depth field research. Other episodes cover topics ranging from virtual research to exploring the politics of black mayors in predominantly white areas of the United States to researching violent organizations in Colombia.

The podcast was initially launched as a vehicle to disseminate information from those featured in the book to a wider audience, but eventually the podcast expanded to include interviews with students and faculty in British Columbia. Undergraduate and graduate students in British Columbia were able to share their experiences by writing high-quality research papers, while faculty could discuss questions of research methodology and ethics in a more meaningful setting. dynamic and smoother, Krause said.

Krause not only included students as podcast guests, he also gave them the opportunity to work behind the scenes. John Gehman, BC ’21, was one of the many BC students who helped Krause create the podcast. With a podcast course under his belt, Gehman was able to restructure the podcast team, produce a guide for the various stages of the podcasting process, and train in sound engineering to process audio, he said.

â€œWorking on the podcast was a new adventure for Professor Krause and the students,â€ Gehman said. “We all had an incredible amount of ambition but little experience with podcasting at the start.”

While Gehman said he didn’t expect to participate in the creation of a podcast when he first joined Krause’s research team, he was able to extend the learning curve. Gehman, Krause and the rest of the team were able to launch one of British Columbia’s first educational podcasts.

â€œIt was a very enriching experience and still is to this day,â€ Gehman said. â€œKnowing that I not only contributed to academic thought, but also influenced its accessibility to a wider audience.

The accessibility of podcasts is part of what led Krause to create Stories from the field in the first place, and its popularity has shown its appeal to a wider audience, he said.

â€œThere is a podcast for everyone, and I know personally – as someone who lives and listens to podcasts – sometimes you work out at the gym or do something else, you can always listen to a podcast, whereas, you’re not always going to sit down and read a book, â€Krause said.

by Krause Stories from the field has 30 guests, a difficult feat to accomplish online. In order to follow social distancing protocol, all episodes were recorded virtually, which required Krause to find the right gear and the right balance between planning the episode’s conversations and making sure they sounded natural.

While he may record a few more podcast episodes in the future, Krause said he feels Stories from the field is a complete series as is.

Whether or not someone has a degree in political science, Krause said he hopes everyone doesn’t just find Stories from the field engaging, but will also be inspired by its self-starting nature.

â€œPodcasts work when they have passion, planning, and purpose,â€ Krause said. â€œIf you have each of these, you’re off to a good start. “

Gehman echoed Krause’s message that despite a lack of basic knowledge, undertaking a project of this magnitude is possible with a determined team.

â€œAbove all, it should teach anyone that with the right ambition, resources and support, innovations can become reality. “

Same, but not the same: broadcast versus amateur radio

Weather: A hot and dry week by November standards