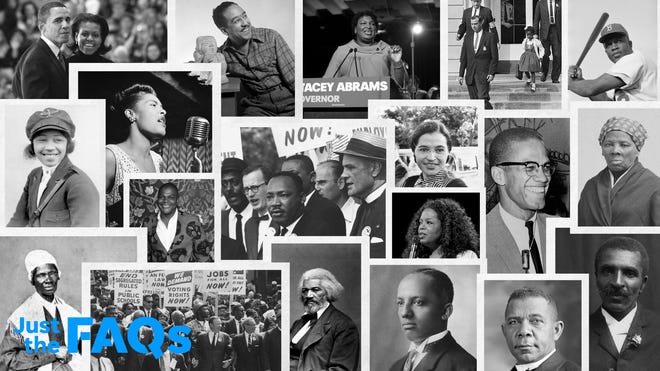 Last year, the Tennessean published an essay I wrote to my soon-to-be twin daughters about the outdated principles behind Black History Month.

A year later, I feel even more strongly about the knowledge needed to help my daughters grow into strong African American individuals. It’s important to share every aspect of our story with our children, even though it can sometimes feel uncomfortable.

Black history is American history and withholding it removes some of the critical fabric that binds our nation together. Black History Month gives us representation, something my kids and all the kids in Nashville deserve to see highlighted. So in February, here are 28 proud profiles, one for each day of the month, celebrating our city’s most overlooked contributors, African Americans in Nashville.

1. After hearing the Fisk Jubilee Singers perform at a show in Britain in 1873, Queen Victoria coined the title “Music City.” The group was organized in 1871.

3. In 1951, Nashville attorneys Z. Alexander Looby and Robert Lillard were the first African Americans elected to the city council since 1911. Looby also represented students arrested at the Nashville Sit-Ins.

4. Jefferson Street was the heart of Nashville’s African-American community. From the 1940s through the 1960s, Jefferson Street attracted musical artists from all over. Artists like Jimi Hendrix and Ray Charles have played at clubs Del Morocco, Club Baron and Club Steal-Away. And a bit more about Charlotte, Etta James recorded a live album at the New Era Club.

5. Based in Nashville in 1905, brothers Moses and Calvin McKissack established the nation’s first African-American architectural firm. It is the oldest minority-owned architecture and construction firm in the United States. Their best-known projects include the Carnegie Library at Fisk University, Nationals Park baseball stadium, and the National Museum of African American History and Culture.

8. On May 10, 1960, Nashville became the first city in the segregated South to desegregate its food outlets thanks to the many efforts of a civil rights activist like Diane Nash.

9. In January 1794, a slave, Robert “Black Bob” Renfro, was licensed to sell liquor, making him Nashville’s first African-American entrepreneur. He will remain legally a slave until November 10, 1801.

11. In September 1925, Deford Bailey made his first radio appearance on Fred Exum’s WDAD, a Nashville station. Bailey would go on to become the Grand Ole Opry’s first African-American star. Often referred to as the “Harmonica Wizard”, Bailey is buried in Greenwood Cemetery.

12. In the late 1800s, Minnie Lou Crosthwaite became the first African American person to take and pass the Professor’s Examination. At the age of 17, she received her teacher training at Fisk University. She also earned medical degrees from Meharry Medical College and Chicago Homeopathic Medical College.

13. In 1969, Avon Williams became the first African-American senator elected from the state of Tennessee.

15. On March 4, 1833, Alphonso Sumner, a free African-American man, opened the first black school in Nashville. The white community was so upset that they publicly flogged him in 1836, forcing him to leave Nashville for Cincinnati.

17. Built in 1960, Starday-King Sound Studios (originally Starday Sound) was one of the busiest studios in town. From 1970 to 1975, James Brown recorded several hits such as “Get Up (I Feel Like Being a) Sex Machine”, “Super Bad” and “Hot Pants”. The building has been vacant since 2000.

18. In 1946, Charles S. Johnson was named the first African-American president of Fisk University.

19. In 1971, Nashville-born David Crosthwait was elected a Fellow of the American Society of Heating, Refrigeration, and Air Conditioning Engineers (ASHRAE), making him the first African-American member. Crosthwait was responsible for creating heating systems for large buildings such as New York’s Rockefeller Center and Radio City Music Hall.

20. In 1966, Dr. Dorothy Lavinia Brown aka “Dr. D” became the first African-American woman to be elected to the Tennessee General Assembly.

21. In 1992, Jesse Russell received a patent for his work designing digital cellular base stations, inventing the digital cell phone.

22. In 1991, the Tennessee Tribune was founded by Rosetta Irvin Miller-Perry, making her the first African-American woman editor in the state of Tennessee.

23. After breaking down barriers and winning countless awards, Charley Pride was inducted into the Country Music Hall of Fame in 2000.

These last five are recent events that shed light on a potentially positive future.

24. On November 5, 2020, the Metro Council approved the ordinance to create Representative John Lewis Way, beginning at the corner of Jefferson Street and 5th Avenue through downtown to the corner of Oak Street.

25. The National Museum of African American Music opened on January 18, 2021.

27. The Nathan Bedford Forrest statue along Interstate 65 was removed on December 7, 2021.

28. Le Frist has an upcoming exhibit for Alma W. Thomas who was the first African American woman to have a solo at the Whitney Museum of American Art. Contemporary Nashville artist, LeXander Bryant’s work will also be on display.

Jerry Pentecost is the drummer for the Old Crow Medicine Show.

“Synthetic Voices Want To Take Over Audiobooks” by Tom Simonite