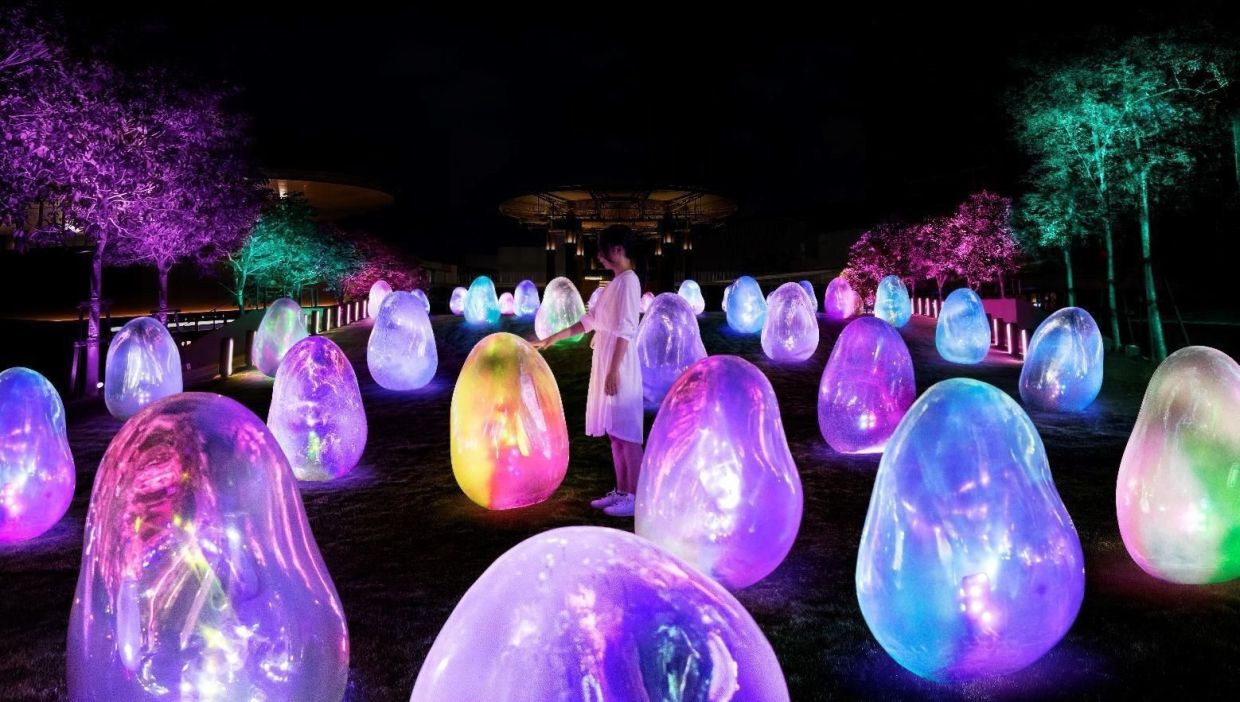 Imagine a world where light, sound, color and movement come together in a magical and vibrant ecosystem. That’s what Resonant microcosms: color of liquefied light, sunrise and sunsetis all about, says TeamLab team leader Ghani (Masato Takeuchi) from Japan.

According to Ghani, who came to Malaysia three weeks ago to work on the project, these works change at sunrise and sunset.

During the day, after sunrise, it is a mirror. The innumerable ovoids in the garden reflect life and their environment – be it buildings, plants, people and any objects or movements around them. Photo: LaLaport BBCC

“During the day, after sunrise, it is a mirror. The countless ovoids (egg-shaped objects) in the garden reflect life and their surroundings – be it buildings, plants, people and any objects or movements around them,” he explains.

“At night, when the sun goes down, it’s LED lights and sound. If you touch an ovoid, the sound reverberates from the touched room to the next until it becomes a magical vibrating symphony,” he adds.

“Our team created this art installation because we wanted to connect with the environment and the people in it,” says Ghani. TeamLab created this art installation because they wanted to connect with the environment and the people in it, says Ghani. Photo: The Star/Chan Tak Kong

“So if you are standing here next to this ovoid and someone touches an ovoid over there, the colors of the ovoids will change and a sound will be made, from there to where you are,” says- he.

“It makes people more aware of the existence of others in the same space. And we will know that we are not alone in this microcosm (community or place that represents in miniature the characteristics of something bigger), we are all in the same boat”, he adds.

Ghani says TeamLab’s art installation is different from other works of art in that people are part of the work. Without visitors, there is no interaction or movement and therefore nothing happens.

“For example, if you’re in a museum or an art gallery, like the Louvre in France, and you want to take a picture with the Mona Lisa, you wouldn’t want other people in the picture. Also, the children cannot run into a museum.

“But here, in this garden, children can run, touch and play among the exhibits – it’s interactive. In fact, you want people around. Visitors are part of the exhibition, they are part of the art because when they touch it and interact with it, it changes color and makes sound,” he explains.

“Even if it is wind, rain or an animal such as a bird, the movement can cause the ovoids to emit light and sound, and with each movement, the colors change” , he adds. At night, when the sun goes down, it’s LED lights and sound. If you touch an ovoid, the sound reverberates from the touched room to the next until it becomes a magical vibrating symphony. Photo: LaLaport BBCC

Thus, visitors are encouraged to enter the Central Rooftop Garden and touch the ovoids to “resonate the microcosm”.

Each ovoid has speakers and sensors and is connected by a network. When you touch or push it, the color will change and it will make a vibrating sound, which will affect the surrounding ovoids and trees.

This project is an experiment in color and each piece features two interacting colors. We have at least 57 colors in total and countless ovoids and trees in the outdoor rooftop garden, says Ghani.

The color combinations are in a programmed sequence. They are synchronized and digitally connected via the network, but require touch and movement to activate, he says, adding that TeamLab started the Resonating Microcosmos project three years ago. Visitors are encouraged to enter the Central Rooftop Garden and touch the ovoids to “resonate the microcosm”. Photo: The Star/Chan Tak Kong

The Japan-based art collective founded in 2001 comprises an international team of artists, programmers, engineers, CG animators, mathematicians, architects and other specialists working collaboratively to realize each of the ovoids .

According to Ghani, they seek to navigate the “confluence or meeting place of art, science, technology and the natural world”.

TeamLab has held numerous exhibitions around the world, including New York, London, Paris, Singapore, Silicon Valley, Beijing, Melbourne, among others, as well as large-scale permanent exhibitions in Shanghai, Macau, Tokyo, and Singapore.

“To date, we have welcomed over 28 million visitors to our art exhibitions worldwide,” says Ghani. This project is an experiment in color and each piece features two colors interacting together, says Ghani. Photo: The Star/Chan Tak Kong

“TeamLab’s Borderless Museum in Tokyo has welcomed 2.3 million visitors from more than 160 different countries and regions in the year since its opening and has been recognized as the most visited unique art museum in the world. It was also named one of the Greatest Places in the World of 2019 by TIME Magazine,” he adds.