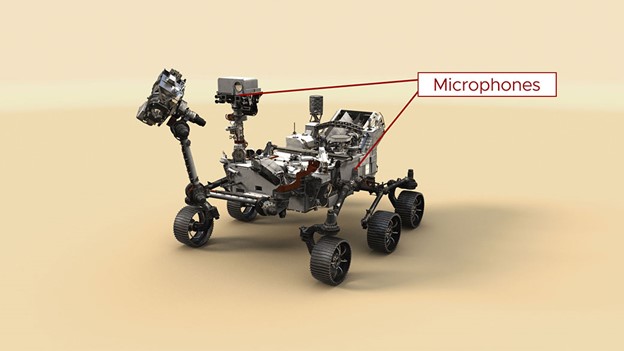 Two microphones aboard NASA’s Perseverance rover have been listening intently to the surface of Mars since the rover landed in February 2021. The Martian atmosphere has a pressure less than 1% of that on Earth, and a very different, CO2-rich, composition, so scientists have hypothesized that sound travels differently on Mars. However, until now, no real data on the nature of sound on Mars has ever been collected. A study led by Dr. Sylvestre Maurice used data from the Perseverance microphones to study the acoustics of sound in the audible and higher frequency range (20 Hz – 50 kHz) on Mars. The microphones picked up sounds made by the rover itself or its Marscopter companion, Ingenuity, and could therefore be compared to data of those same sounds made by those spacecraft when they were on Earth.

Overall, the study found that thin CO2-the rich atmosphere of Mars causes sound to travel at a lower speed (537 mph for low tones and 559 mph for high tones) than on Earth (767 mph regardless of pitch). The weak atmosphere also causes the distance sound can travel through the air to decrease, especially for high-pitched sounds, making the Martian surface eerily quiet. However, Martian atmospheric pressure changes with the seasons, and the neighborhood of Perseverance is expected to get noisier in the coming months as Mars’ northern hemisphere enters winter. This study also showed that listening to rover sounds can help engineers monitor the health of onboard instruments. As such, Perseverance will continue to listen to itself and the sounds of Mars, to help scientists understand the dynamics of the Martian atmosphere through the seasons and to keep a close ear on the rover’s evolution. READ MORE