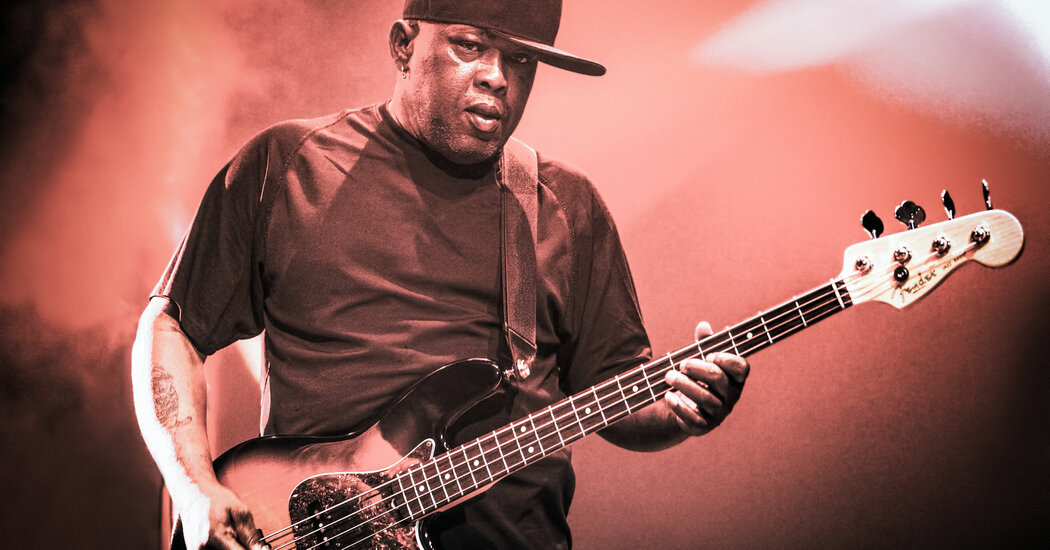 Robbie Shakespeare, a Jamaican bassist who, as one half of the rhythm duo Sly and Robbie, has performed with and produced some of the biggest names in music while transforming reggae with daring infusions of rock, blues and jazz, died Wednesday in a Miami hospital. . He was 68 years old.

Guillaume Bougard, a close friend and frequent collaborator, said the cause was complications from kidney and liver transplants.

From the mid-1970s, Sly and Robbie were among the most prolific musicians in the business, reggae or otherwise. Mr. Shakespeare once estimated that they had participated in 200,000 recordings, either for themselves or as auxiliary musicians or producers for other artists.

The pair hail from Kingston’s creative cauldron of the 1970s, working as session musicians at famed Channel One recording studio and performing with reggae superstars like Peter Tosh, most notably during his 1978 tour as the opening act of The Rolling. Stones. This tour gave the duo their first international exposure.

Their sound differed from the melodic music of Bob Marley, Jamaica’s biggest star, with a more pronounced emphasis on the rhythm and overt influences of rock and blues, qualities that foreshadowed new styles of reggae, such as the dancehall, which emerged in the late 1970s and early 1980s.

Their drive to push the boundaries of reggae quickly caught the attention of Chris Blackwell, the owner of Island Records, who saw the opportunity to marry their sound with North American and European pop groups.

They provided the catchy beats for Grace Jones’ 1981 hit album, “Nightclubbing”. They soon worked with bands far removed from the Kingston sound of their youth, like Bob Dylan and Joe Cocker, and produced singers like Marianne Faithfull, Madonna and Sinead O’Connor.

The duo were both die-hard reggae aesthetes and radical innovators, never afraid to break with tradition. Their work with rock musicians has led them to merge rock syncopation with rhythm into a drop of reggae. And they were among the first musicians to regularly use electronic drum machines.

â€œTheir whole career has been geared towards creating new things, which no one else has done before,â€ said Mr. Bougard, who also authorized some of their work to be released in Europe through his label, Taboo 1.

They were nominated for 13 Grammy Awards and won two: in 1985 for their production of the Black Uhuru album “Anthem” and in 1999 for their own album “Friends”.

It was a fitting title, as beyond their musical talents, Mr. Dunbar and Mr. Shakespeare were known for their close personal bond. They were very different people – Mr. Dunbar relaxed and outgoing, Mr. Shakespeare calm and cerebral – but their talents complemented each other, and they could often look like two halves of the same person.

“The longest separation in the past 25 years is around three weeks,” Mr Shakespeare told the British newspaper. The Independent in 1997. â€œIt’s very difficult to be apart for that long. I’m going on vacation with my family, and as soon as I reach where I’m going, I want to be back with Sly, playing some music.

Robert Warren Dale Shakespeare was born September 27, 1953 in East Kingston, Jamaica. He grew up in a family of musicians, but his parents were strict and he left home when he was 13.

It was during Lloyd’s practice sessions that Robbie started learning guitar – a homemade acoustic guitar at first. But a chance meeting with bassist Aston Barrett, known as Family Man, leads him to change instruments.

He begged Mr. Barrett to teach him how to play bass. Mr Barrett, who would later join Marley’s group, the Wailers, said yes, but only if he stayed out of trouble.

Robbie did more than that; he went home and practiced all night, and the days and nights that followed, until his fingers bleed. Decades later, he showed Mr. Bougard how the strings had worn down his fingerprints until they were virtually unreadable.

Soon he played in a series of Kingston bands, often several at a time. He would perform as a session musician in studios during the day, then perform in clubs along Red Hills Road at night. It was while working in clubs that he met Lowell Dunbar, says Sly, already considered one of the best drummers in town.

â€œHe played drums like I always told drummers I would play with to play,â€ Mr. Shakespeare told the United Reggae site in 2012. “He was doing it right and doing it easily and well.”

After working for several years at Channel One, Mr. Shakespeare and Mr. Dunbar left on their own, working for Mr. Dunbar’s Taxi label. They had immediate success producing “Showcase”, a 1979 album by singer Gregory Isaacs, who at the time was one of the best-selling artists in Jamaica.

That same year, they performed with French singer Serge Gainsbourg on â€œAux Armes et CÃ¦teraâ€, a reggae version of the French national anthem, which became one of Mr. Gainsbourg’s greatest hits. They released their first album, “Sly and Robbie Present Taxi”, in 1981.

Mr. Shakespeare is survived by his wife, Marian, and one son, Mikiel. Complete information on the survivors was not immediately available.

In 2020, Rolling Stone ranked Mr. Shakespeare 17th on their list of the greatest bassists of all time.

The duo continued to make music into the 21st century, even as complications from diabetes kept Mr. Shakespeare from traveling. Their latest album, “Red Hills Road”, was released earlier this year.

â€œIf you are chosen by music, I don’t think you can say it’s time to retire,â€ Mr. Shakespeare told The Scottish newspaper in 2009. “It is a very sweet gift, and we have been trusted.”

The latest Holden V8 isn’t what you think it is

Supply chain issues in 2022 that musicians should be aware of