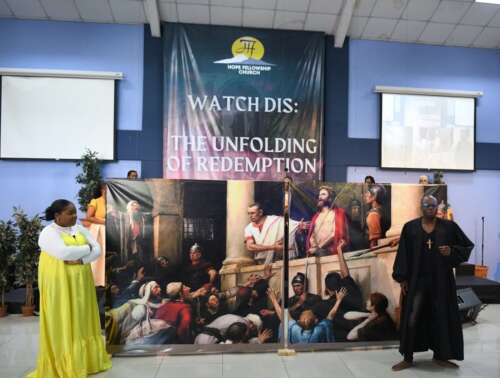 Lazarus (right), played by Ishmael Pryce, recounts Jesus’ trial in Pontius Pilate’s palace and contemplates Pilate’s plea in pleading Jesus’ case rather than acting as a judge in a formal audience. Listening on the left is Martha – played by Chavel Ford.

LONG before the 9am start of the Hope Fellowship Ensemble’s annual Easter Cantata on Sunday 17 April, many returning members and guests flocked to the shrine at 23 Molynes Road, Kingston, ahead of another worship service exceptional.

Benches that had been empty for more than two years filled up, while ushers ensured that COVID-19 protocols were maintained. The hybrid event was also broadcast live on the Facebook and Youtube platforms.

The nine-member Hope Fellowship Ensemble, joined by guest soloist Sabrina “Sabree” Nembhard, resplendent in their Heather Laine creations, delivered to the usual high standard, complete with dramatic presentations, dancing and storytelling around the theme’ Watch Dis: The Unfolding of Redemption’.

Written by playwright Paul Pinto, an alumnus of Edna Manley College of the Visual and Performing Arts, and conducted by choir director Dianne Ashton-Smith, the Easter Cantata reflected the story of Lazarus, Martha and Mary and the powerful message of The Resurrection.

“Lazarus had a superior understanding of the resurrection. He heard when Jesus said to his sister, “I am the resurrection and the life” and responded to Jesus’ call to come out of the grave. Therefore, because Lazarus had full experience of Jesus demonstrating his power to raise people from the dead, he – of all the Master’s disciples – was unperturbed by Jesus’ death because that Lazarus knew He would rise from the grave. So whenever consternation was warranted, Lazarus could calmly say, “Watch Dis: Jesus is up to something,” Pinto said.

Playing the roles of Lazarus, Martha and Mary were: Ishmael Pryce, Chavel Ford and Marcia Purcell, respectively, with the voice of God played by Quinton Yearde. The dancer was Antonio Campbell, with Beverly McCook as narrator.

The actors delivered a compelling take on the resurrection story from Lazarus’ perspective. The recitative was supported by a carefully curated collection of 13 contemporary gospel songs with notes of traditional hymns and African-inspired melodies, arranged and written by renowned gospel writers and arrangers; Bradley Knight, Cliff Duren, Geron Davis and Michael W Smith, as well as Dianne Ashton-Smith.

According to Ashton-Smith, preparation for the Hope Fellowship Church Easter Cantata began in January this year with production meetings in conjunction with the playwright, sound engineers, set design team and rehearsals. overall weeklies.

“We are delighted that through the omnipotent and benevolent creative force of multimedia – song, dance, instrumentation and theater – the message of resurrection, transformation and redemption was clearly articulated for those who attended the presentation. Once your ultimate goal is the glory of God, the worship of God will become a real and true expression and lived experience for those who participate and those who watch online. We appreciate the overwhelming responses we received from the congregation and those who joined on social media for this 14th annual event. Additionally, this could not have been such a great blessing without the dedication and commitment of the members of the ensemble, the production team, the worship group and the support of our pastor Sam McCook,” said said Ashton-Smith.

For recruitment and retention, some Minnesota companies are turning to same-day payment