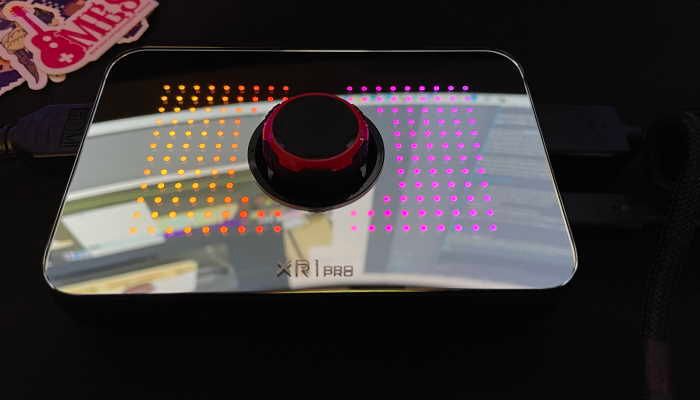 Capture cards today are a dime a dozen. From Elgato’s wide range of offerings to Razer and AVerMedia, you don’t have to look far to find a good capture card. So when we got a chance to check out the EVGA XR1 Pro capture card, I jumped on it with the goal of seeing exactly what the PC peripheral company brought to the table with its foray into video creation tools. contents.

At first glance, the EVGA XR1 Pro looks almost identical to its less powerful brethren, the XR1. The square chassis is coated in a near-mirror finish with RGB underneath, flanking a central dial that really makes this card stand out visually from the competition. On the front you’ll find two audio jacks: one for listening to the capture card’s audio mix, while the other is for integrating your console’s party chat into your stream.

The sides have the HDMI input port, while the other has the HDMI output and the USB-C port to connect to your PC. It’s chonky compared to the competition, easily bigger than my Razer Ripsaw HD or Elgato HD60S cards, but I like how much character the card has thanks to its finish. It’s not just a nondescript brick sitting on my computer desk, it’s attractive to look at with the RGB flashing on top, while the center dial makes it super easy to control my audio levels without having to dive into OBS .

OBS is also slapped on the box, with EVGA stating that the XR1 Pro card is OBS certified, but you can realistically use this card with any major streaming software, such as Streamlabs, XSplit and more.

What sets this board apart from the standard XR1 and XR1 Lite is its feature set. Each of these cards can handle 1080p60 capture, but the XR1 Pro stands out by being able to not only handle 1440p and 4K passthrough, but also capture both resolutions, even supporting HDR signals.

While I’m disappointed we’re not getting 4K60fps capture, the card at least supports 4K60 pass-through, which means console gamers won’t have to worry about dropping their frame rate when streaming. The EVGA XR1 Pro also supports VRR frame rates, which is necessary for those with compatible monitors who don’t want to sacrifice smooth gameplay in the name of capture quality.

One thing I don’t like about Elgato cards is the fact that to get the most out of them, it takes a ton of drivers and software to install on my PC. As a result, I’ve been using the Razer Ripsaw HD for years: it’s simply plug-and-play. The EVGA XR1 Pro is the same. There’s no major software to install, or downloading a ton of drivers, the PC just reads the card like a webcam. There’s no annoying setup or software to tweak. Just set up a video capture source in OBS, make sure the audio is going through your streaming software’s audio configuration, and away you go.

Indeed, the most laborious process of setting up the EVGA XR1 Pro is making sure you have room on your desk for the card itself, at least in my experience with audio mixers, Razer Stream Controller and everything I’ve cluttered my setup with. This is where the Razer Ripsaw HD’s smaller form factor has an advantage for someone like me, or even an internal card like my Elgato 4K60 Pro – a smaller footprint.

The EVGA XR1 Pro, once you select it as your video source, it’s quite tactile and away you go. There’s no finagling to do with the audio, although you can adjust the stream if you monitor it on the card itself using the center dial. Plus, if you’re playing console multiplayer and want to include a party in the stream or recording, simply plug your controller’s output into the party input on the XR1 Pro and you’re good to go.

Importantly, as most modern consoles are nearly 4K by default, being able to capture in 4K is essential, but it’s not the only way to do it. In this example I tested 1440p60fps pass-through, although OBS was set to record a 1080p canvas. The whole setup was flawless, with the only real settings being adjusted on the PlayStation 5 itself rather than in OBS. Additionally, the card recognized that I was connected to an HDR monitor and enabled capture without any glitches, artifacts, or washed out colors, giving me the vibrant image I expected even though there was no passing.

Unfortunately, I wish this card wasn’t limited to 4K30 capture streams. While for streamers who play on console this might make sense: after all, most fidelity modes on console games are limited to 4K30, this does not allow gamers to capture the best streams when playing. in performance mode. It also limits streamers using two PC streaming setups, especially if they’re streaming in 4K60, or even just capturing high-quality video for an upcoming YouTube creation. That said, these are extreme case examples and for most card users, even a simple 1080p60 capture will suffice.

I also like that capturing in OBS is instantaneous, instead of having to deal with watch delay, or even go through the rigamarole to sync your camera to your capture card delay. I could just play my games over the OBS stream rather than watching the monitor itself, a test the EVGA card passed with flying colors.

So, who is the EVGA XR1 Pro for? Ultimately, most PC streamers who don’t use two PC setups run OBS or whatever platform they choose and capture their video on location. It seems designed more for those streaming console games. It looks like a capture card that kept the capabilities of the new consoles in mind and built around them as well, ensuring that HDR capture was possible since both major consoles use HDR, while also ensuring at least 4K60 passthrough. . 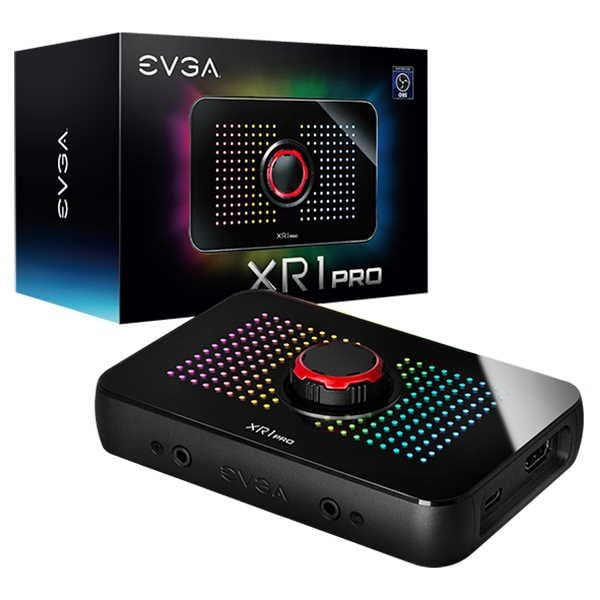 For PC gamers using a capture card in their setup, being able to use high refresh rates in your capture is essential, as the card supports up to 144Hz when capturing at 1440p. Plus, working with variable refresh rate monitors means you can keep GSync or FreeSync enabled while you game – something you can even take advantage of if you’re streaming to an Xbox Series X with a compatible display.

It’s a big card, though, with a large desktop footprint. Although it’s attractive to look at, I really wish the XR1 Pro was a bit smaller to better fit my cluttered desk.

That said, the ease of use, instant response and feature set make it a stellar capture card against its 4K capture competitors. So the fact that it’s been discounted to under $100 makes the EVGA XR1 Pro a no-brainer if you’re looking for a quality card to upgrade your stream. In my testing the visuals are crisp, the only degradation I’ve seen is from the OBS capture settings, not the card itself. The features that come with the XR1 Pro and the sub-$100 price tag on the EVGA website, Newegg, Amazon, and more, mean the EVGA XR1 Pro should be at the top of your list when looking to upgrade your setup. of content creation.

Full disclosure: The product discussed here was provided by the manufacturer for the purpose of this review.