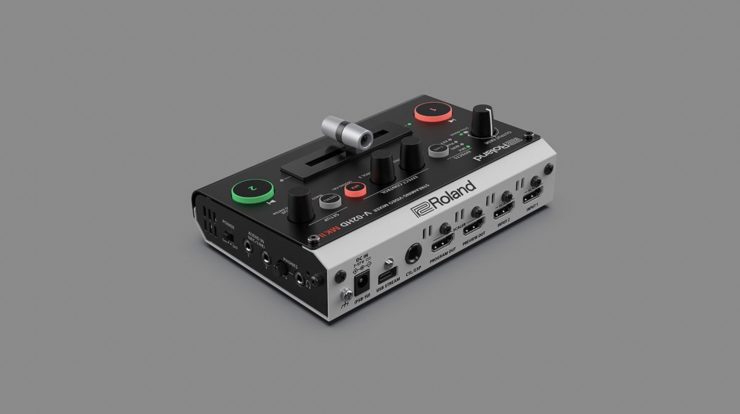 This is the sequel to the original V-02HD that we reported on in late 2018.

The V-02HD MK II has a built-in encoder that produces the output of your program through the USB Type-C port, allowing you to easily stream from a computer without the need for an additional encoder. Audio from cameras and external sources can be mixed into the V-02HD MK II and controlled through a dedicated headphone output. Switched output is integrated in real time and output via HDMI for reliable recording or monitoring. The mixer works with 4: 4: 4 10 bit processing. Built-in scalers allow mixing of different formats, such as HD to SD and computer resolutions. You can integrate and disintegrate audio, both analog and digital. The V-02HD MK II features a built-in three-band EQ and dynamic

Users can connect up to two HDMI cameras to the V-02HD MK II and it does all the hard work, eliminating USB conflicts with multiple webcams and HDMI to USB encoder adapters. Other devices with HDMI output are also supported, including computers, mobile devices, and game consoles.

The V-02HD MK II features an easy-to-use control layout and a T-fader. The USB connection is plug-and-play, so you can quickly stream to platforms like YouTube, Facebook, Twitch and more. Zoom. It will also work well with OBS Studio, Streamlabs OBS, StreamYard, and Restream.

The V-02HD MK II supports hands-free control with up to two optional BOSS pedals, which is convenient for creators who perform or demonstrate during streams. With inconspicuous off-camera stomping, it is possible to change camera angles, cut into a static image, layout transition scenes, blend picture-in-picture windows, etc.

Upcoming free remote control apps will allow the V-02HD MK II to be controlled via an intuitive graphical interface on their iPad or computer. (Remote control apps for macOS and Windows will be available at the end of 2021.)

What’s very interesting is that the V-02HD MK II also offers free access to Roland’s new AeroCaster Switcher for iPad, a powerful video and multimedia expansion solution for select Roland hardware switches. With this unique app, users can switch between wireless streams from up to five devices, including smartphone and tablet cameras and screen shares from computers and mobile devices. You can then output a combined program stream to the V-02HD MK II or another supported Roland mixer with an HDMI input.

The Roland V-02HD MK II Streaming Video Mixer is available for US $ 395.

Competition comes in the form of products such as:

Matthew Allard is a multi-award-winning and ACS accredited freelance cinematographer with 30 years of experience in over 50 countries around the world.

He is the editor of Newsshooter.com and has written on the site since 2010.

Matthew has won 41 ACS awards, including four prestigious Golden Tripods. In 2016, he won the award for Best Cinematography at the 21st Asian Television Awards.

Matthew is available to hire as a DP in Japan or to work anywhere else in the world.