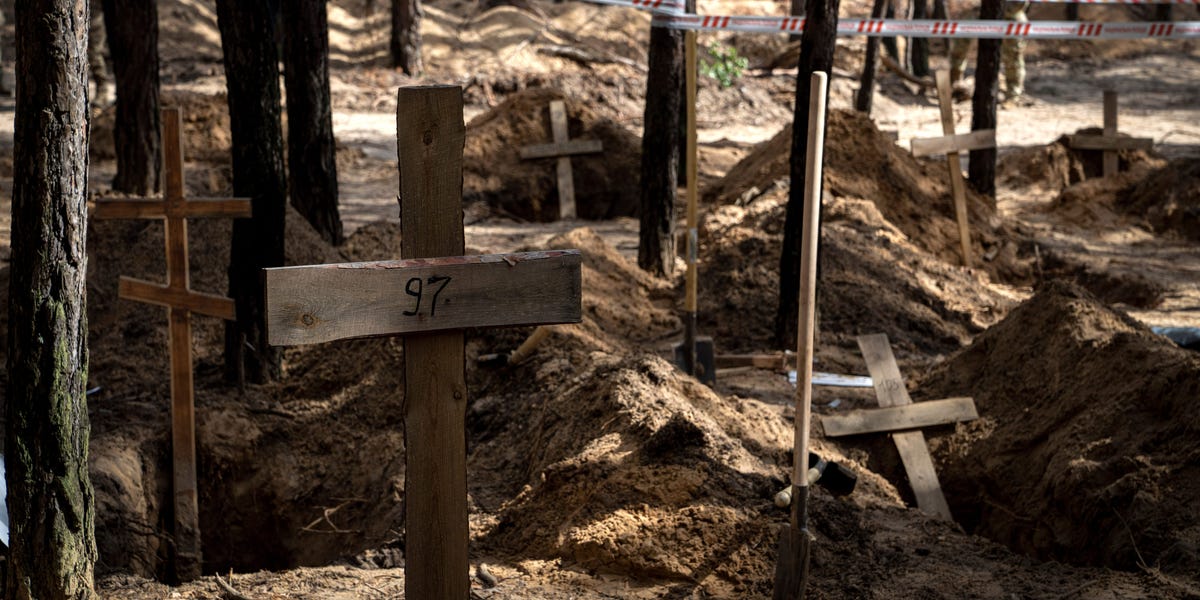 A Russian soldier in Kyiv recounted in a phone call how his commander ordered troops to kill Ukrainian civilians to conceal their positions, which is a war crime under international law.

The call was just one of many unauthorized phone calls made in March by Russian soldiers, who were intercepted from the Bucha area – a Kyiv suburb where civilians have been massacred – by ISIS forces. Ukrainian order. The New York Times obtained, checked and translated the recordings.

The calls reveal the grim reality that Russian soldiers faced in the first weeks of the war in Ukraine, which began in late February. The Times report documented soldiers telling their mothers, friends and girlfriends about some of the atrocities they witnessed – and participated in.

In a call to his girlfriend, a Russian soldier identified only by his first name, Sergey, said his commander had given the order to take Ukrainian civilians into the forest to be executed.

“They told us that where we are going there are a lot of civilians walking around. And they gave us orders to kill anyone we see,” Sergey said, according to the Times.

His girlfriend replied, “Why the hell?”

“Because they might reveal our positions. … We fucking are going to do that, it seems,” Sergey replied, according to the report. “Kill all the passing civilians and drag them into the forest. … I’ve already become a murderer. That’s why I don’t want to kill people anymore, especially those I have to look in the eye.”

Killing civilians is a war crime under the Rome Statute of the International Criminal Court.

According to the statute, “intentionally directing attacks against the civilian population as such or against individual civilians taking no direct part in hostilities” would be considered one of the “serious violations of the law” in international armed conflicts.

The United Nations has previously accused Russia of committing a long list of war crimes in Ukraine.

Among the atrocities listed are sexual violence, torture and “indiscriminate attacks with explosive weapons”, according to Erik Møse, who led the The UN investigation on human rights violations and crimes committed in Ukraine.

In another recording between Sergey and his girlfriend, the Russian soldier said a captain had ordered the execution of three men, in part because their unit did not have enough food to sustain themselves.

“We detained them, stripped them naked and checked all their clothes. Then we had to decide whether to let them go,” Sergey said. “If we let them go, they might reveal our position. … So it was decided to shoot them in the forest.”

When his girlfriend asked why they weren’t taken prisoner, he replied, “We should have fed them, and we don’t have enough food ourselves, you see.”

The UN was not the only international entity to suspect Russia of committing atrocities in Ukraine. Russian forces, which have repeatedly targeted civilians since the start of the war, have been widely accused of committing war crimes in Ukraine, including by world leaders and leading human rights groups.

President Joe Biden has gone so far as to accuse Russian President Vladimir Putin of committing “genocide” in Ukraine. Biden said in April that Putin was fighting to “destroy the very idea of ​​being Ukrainian”.