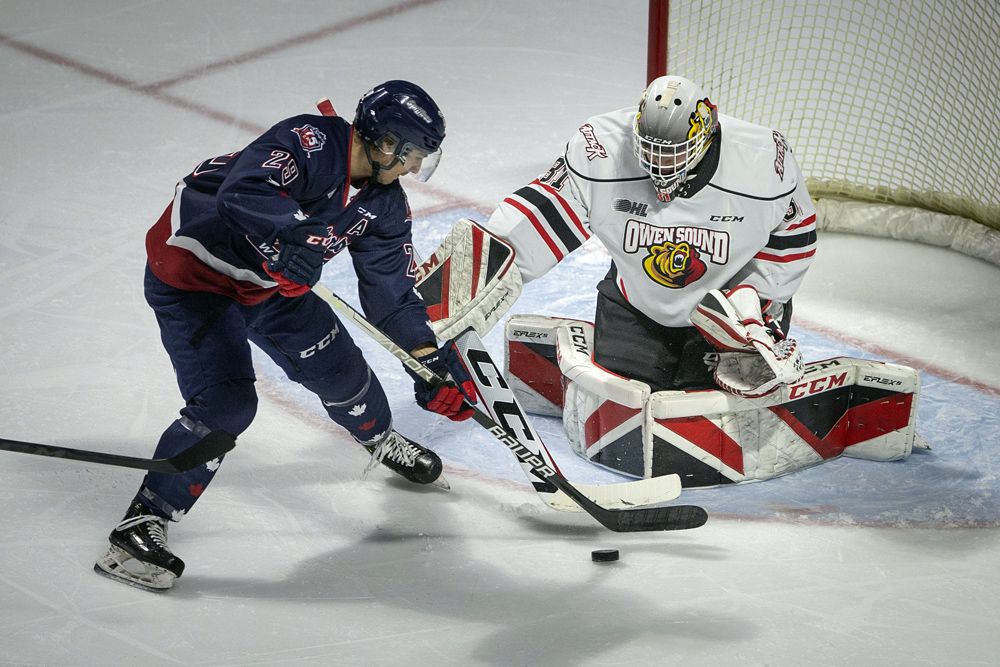 The Owen Sound Attack’s six-game winning streak became a seven-game point streak as the Bears fell to the Windsor Spitfires, 2-1, in overtime Thursday night inside the WFCU Center.

With the win, the Spitfires improve their own winning streak to three games and take their season high to 30-14-3-3.

Nick Chenard, playing against the team he grew up near his hometown of Tecumseh, should snag the Attack single point in his locker. The 19-year-old goaltender kept Owen Sound in the game until the Attack skaters got the legs off the bus in the third period.

Chenard stopped 30 of 31 shots in the game, as the Attack could only make 10 of their own shots in the first 40 minutes of play.

Will Cuylle opened the scoring at 12:34 of the second period on the Spitfires’ No. 21 shot. The burly New York Rangers prospect winger used his hard shot to blast the puck through Chenard after teammate Wyatt Johnston gained the zone and drew in the defenders. Johnston, who led the league in points and assists before the game, picked up the No. 61 assist on Cuylle’s goal.

Chenard stopped 11 shots in the second period and nine in the third to give his team a fighting chance, and Nick Porco rewarded the effort as time ticked away.

Ethan Burroughs worked the puck off the wall and centered on Porco who left a snap from the face-off point that beat Mathias Onuska to tie the game with less than seven minutes left.

Then, with just a few seconds left on the clock, Taos Jordan was about to stumble, meaning the third-ranked Spitfires power play unit would have the advantage in overtime.

They didn’t waste the chance as Johnston snatched a shot from the post and Cuylle scored his 30th goal of the year just over 30 seconds into extra time.

Onuska made 18 saves on 19 attack shots in the contest.

Owen Sound gets back to it Friday night as they head to Saginaw for a two-game game against the Spirit. The puck drop at the Dow Event Center is scheduled for 7:05 p.m.

Madden Steen returned to the Attack lineup on Thursday night. The rookie defenseman had been out since a Feb. 25 game in Kitchener when he received a big hit and was helped off the ice. Prior to that, Steen had been absent from the Attack squad since January 9. Logan LeSage missed his second game in a row, he would have been suspended by the league for abusing the official penalty last Saturday.

Ontario Hockey League commissioner David Branch announced Thursday that Flint Firebirds president of hockey operations Terry Christensen has been expelled from the league for conduct “detrimental to the welfare of the league.” The move follows remarks by Christensen that violated the OHL’s harassment, abuse and diversity policy, the league said. The conduct of the former Firebirds president violated league expectations of “proper conduct for a representative of an OHL team and he forfeited the privilege of participating in the league.” The investigation into Christensen began after an allegation was submitted through the OHL’s Player Communications System.