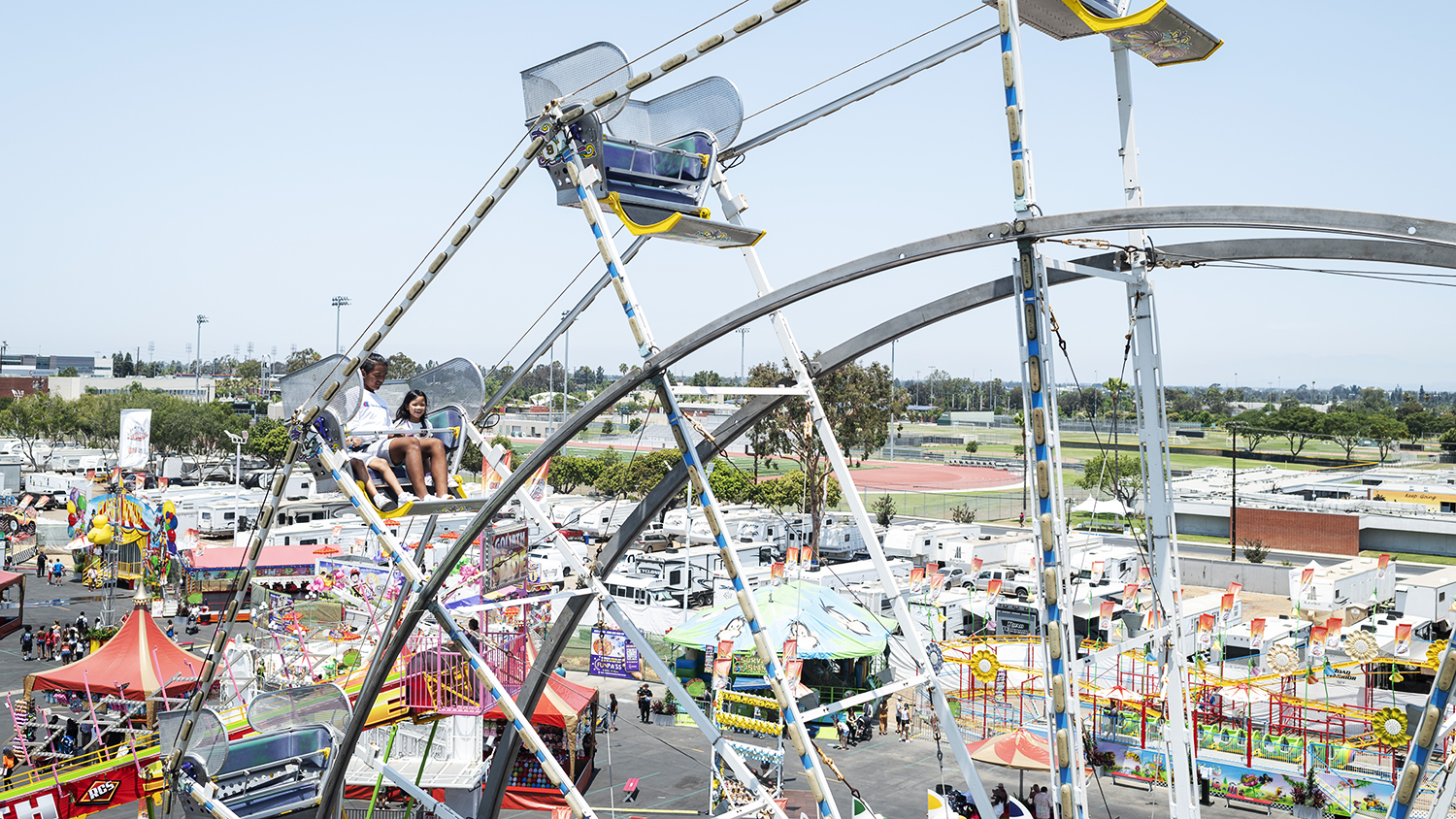 A potential move by state officials to give private interests more control over state-owned California fairgrounds has reignited a long latent debate over who exactly these properties are supposed to serve.

Supporters of the Sacramento Smooth Exit proposal say it is no longer viable for local fairgrounds to act by state rules and investments, led by local councils appointed by the governor’s office .

State officials have said little in public about their still fledgling plan to pull out of trading activities at these properties, which in part involves the formation of non-profit entities to fund and run each fair.

Some local leaders and activists wonder if privatization and abuse could stem from this vacuum, given the history of some fairgrounds scathing audits and findings of financial mismanagement.

“Who says ‘No’? Who said ‘hey you can’t do that’? Where would the checks and balances be? Del Mar Mayor Terry Gaasterland said in a Monday interview overseeing a city in San Diego County where the Del Mar Exhibition Center covers about 30% of its city’s total area.

The state has been exploring such an initiative since November 2020, Voice of OC reported at the time, most recently through a limited set of public workshops with interested stakeholders – whose recordings are not online.

This year state budget summary also makes a fleeting, even vague, mention of the plan.

Few places across the state have seen this debate unfold as intensely as in Orange County, where fair board members argued a decade ago that Sacramento was not an owner or a friendly neighbor from Costa Mesa and kept the property underutilized.

Yet their plan to address these issues – privatization – sparked a fierce setback from the community and even an investigation by the local district attorney who ultimately cleared board members of corruption allegations regarding the privatization effort. the property.

Now Orange County Fairgrounds officials plan to go public with the latest debate on the state’s plans, at their meeting this Thursday, September 23, at the fair’s board of directors.

A staff report attached to the Fair Board meeting agenda provides one of the first detailed and public glimpses of the kind of governance change the California Department of Food and Agriculture (CDFA) reflected on.

The staff report says “a framework is being developed” for all of California’s fairgrounds to form a Joint Authority of Powers, an entity that allows separate government agencies to jointly exercise common powers. and develop common policies.

Such policies can “include human resources, procurement, contracting and law,” OC Fair staff say in the report.

And each member fair, as part of the proposed governance change, could form a local non-profit corporation to maintain the fairground, “running its programs, including the annual fair,” OC Fair staff say in his report.

The prospect raises concerns about the privatization of Reggie Mundekis, a keen observer and watchdog of the policy making and governance of Costa Mesa fairground ownership.

“Allowing a private, non-profit organization to operate the annual fair is de facto privatization, whatever name you want to give it,” she wrote in a September 19 letter to the Council of the fair before Thursday’s meeting.

“This is a way out of the state of California’s fair business by privatizing the fair’s operations, in addition to other functions,” adds his letter, which sets out a host of other questions – and alternative suggestions – regarding the potential transition of the state. .

After all, Mundekis recalled in an interview with Voice of OC, it was a non-profit organization formed by OC Fair board members over a decade ago that pushed the Extremely controversial attempt to sell fairground land.

The sale of OC Fairgrounds was halted in 2011 by former Governor Jerry Brown in response to vocal protests from community activists.

According to CDFA spokesperson Steve Lyle, there are 74 fairs with various governance structures across California, who said 53 of them are state-affiliated District Agricultural Associations (DAAs) in under the CDFA, employing state civil servants and subject to various state requirements.

The annual fair is considered the largest source of income for many fairgrounds, although these state properties also serve as disaster response areas, food banks and, more recently, COVID-19 vaccination sites.

Under the ownership models discussed by CDFA, members of a board of directors appointed by the governor of an existing fairground could still sit simultaneously on the local non-profit board.

OC Fair staff said that the state would still have a role in the authority of joint powers, if formed, but that new policies would be developed under the centralized administration of the body, which would be under the direct control of its own board of directors – appointed by each fairground state. property – in Sacramento.

“The California Department of Food and Agriculture will be a member of the Joint Powers Agreement and approve DAA participation,” the OC Fair staff report said.

Lyle, who would only answer questions from a journalist via email, said the state’s goal “is to develop a better business model for fairs without changing the ownership of fairs.” This means that local governance models will always be subject to state laws. “

“The state is committed to making fairs more viable, more diverse, more suited to their communities and better equipped to seize a wide range of opportunities,” Lyle said, adding:

“A change in operating model could allow fairs to access additional funding that may not be available currently, such as certain types of grants and increased revenue sharing. “

The state’s ongoing discussions have taken place in public workshops with no recordings available online, while the state has made little documentation of its proposal in writing available to the public.

“It tells me it’s something they’re just trying to get under the ocean floor because they know that as soon as it surfaces it’s not going to turn out very well,” Mundekis said.

Lyle said the CDFA held three public workshops in 2020. He said the CDFA noticed the meetings on its website and with the public by alerting individuals and organizations to a “stakeholder list maintained by the agency”.

The Covid-19 pandemic created restrictions on very public gatherings and business activities that fairs across the state – some already struggling at the time to remain fiscally solvent – have long relied on. their income, forcing them to go virtual for less profit.

Finding other operating models, according to the CDFA and those responsible for fairgrounds, could pave the way for new, more sustainable fairground activities.

“Please don’t wrap us up and hold us back by locking us into a ‘one size fits all’ platform as we are currently oppressed,” read a note from Santa Cruz County Fairgrounds CEO Dave. Kegebein, attached to a document from the CDFA public workshop on 23 November.

Kegebein said the pandemic was not the only sign: “The current economic situation in 2020 is just another of the many reasons why different operating platforms should be considered. In my opinion, DAA’s current operating system got old 50 years ago.

He, like others who submitted notes, recalled the remarks of former CDFA secretary Henry Voss in 1991, telling the fair industry that “it was time for the fairgrounds owned by the State to expand their relationships with the local community and their financial support, as state funding was expected to decline over the next few years to the point of becoming insufficient to maintain infrastructure and operations.

The Santa Cruz County Fairgrounds took this seriously, Kegebein said, and formed his own nonprofit to handle the community’s fundraising.

Indeed, the mayor of Del Mar, Terry Gaasterland, said that while there are global concerns about the relaxation of its state control, a nonprofit may be “more responsive. more local needs and be more empowered to pay attention to local needs ”.

“Right now we have board members and state-appointed employees who actually work for the state. This creates in each jurisdiction where the fairgrounds sit, a competition, a competition between local needs and the priorities of the State ”, declared Gaasterland.

“The city of Del Mar receives a significant portion of its annual revenue directly or indirectly from the fairgrounds – probably more than that, when you think of hotels,” she said.

Lyle, the spokesperson for CDFA, said that “JPAs and nonprofits have been and continue to be viewed by CDFA and stakeholders as possible components of a new governance model”.

He added that “many details have yet to be determined, including how fairground operations can be transferred to nonprofits.

Lyle stressed that the state “will retain ownership of any property currently in its possession, even if an alternative business model is adopted.”

“And the CDFA would continue to exercise oversight in a variety of ways, including, but not limited to, to ensure that state-owned properties continue to be used for the benefit of communities and the general public. , and also because of representation in a new governing body, such as a JPA, ”he said.

The last time a fairground property came out of direct state control was in 2012, when the Los Angeles County Fair switched to a model that delegated management to a nonprofit.

“Legislative authorization is required for any change in business model,” Lyle said.

Brandon Pho is a Voice of OC reporter and a member of the Corps of Report for America, an initiative of GroundTruth. Contact him at [email protected] or on Twitter @photherecord.

Audio recording of hearings not sure to speed up proceedings, seminar hears