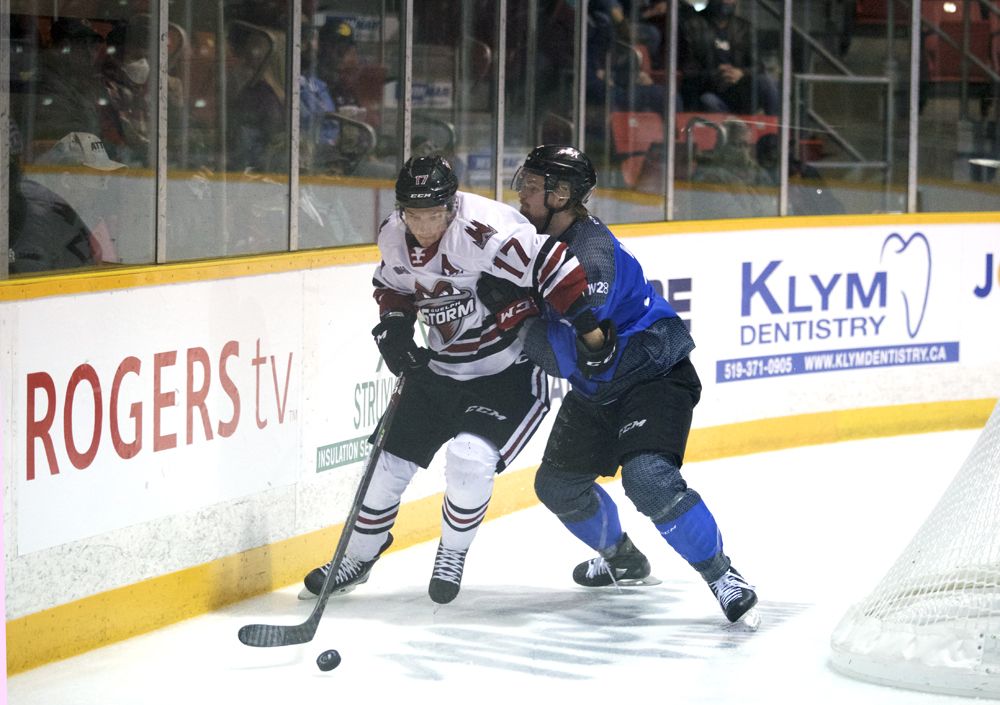 Sam Sedley plays the hero at a night where Mark Woolley’s charity championed a cause while raising money to send children with type 1 diabetes to Diabetes Canada D-Camps.

While celebrating with the shockingly half-capacity crowd inside the Bayshore, Sedley mimed the Superman logo reveal, hands stretching over the Woolley’s Warrior logo on the team’s custom jerseys to be auctioned all night.

“It was an incredible evening. I couldn’t imagine a better finish,” Sedley said. “I wanted to show the Woolley’s Warriors logo to the crowd. I’m so happy for Mark.

The dark cloud of an eight-game losing streak on the Bayshore has completely evaporated with back-to-back wins over the Midwest Division rivals.

Even the typically stoic and reserved coaching staff, whose post-game celebration, in public anyway, is often a dry nod and a firm handshake. Pre-COVID, anyway. Everything was different on Saturday. The mood has changed.

“It was amazing. Even the coaching staff, we were jumping like it was a huge win for our hockey club,” Attack assistant coach Jordan Hill said. “Obviously for the Woolleys Warriors, as a team, we really wanted to get this win, we are very proud.

Winning is the ultimate bandage for all athletic ailments. And now, safely removed from the dark days of “the streak,” players and coaches can admit how losing deflates the locker room.

“It’s hard to stay positive during an eight-game slide, but after breaking it this weekend and going on that little two-game winning streak, it’s unbelievable. It’s like a different team,” said Sedley said.

The game started off on the wrong foot for the Bayshore Boys.

Matthew Papais tied a Guelph Storm franchise record by scoring nine seconds into the game. Papais was on the right end of a pool rebound on the boards just in front of the net as Luca Profaca tossed the puck into the attacking zone. Papais got it right when he pulled the disc through a stunned Nick Chenard.

The newly formed line of Servac Petrovsky, Cedrick Guindon and Colby Barlow got to work putting Owen Sound back in the game.

First, rebounding karma was in play as the puck was aimed off a Storm defenseman’s skate directly at Barlow in the slot. The 17-year-old rookie won’t miss much, as Jacob Oster found out.

Then, just over three minutes later, Cedrick Guindon blocked a shot and found Barlow in the middle of the ice with a pass out. All alone, Barlow beat Oster in the legs to give Owen Sound a 2-1 lead.

It was the Orillia native’s fourth goal in as many spells after going six games without a scorer, which for most players wouldn’t be a crisis, Sedley pointed out after the game, but for Barlow, he did. took personally.

“He’s a special player. He can score from anywhere,” Sedley said. “After scoring last night he celebrated by throwing the monkey off his back. We were joking like, man, some of us haven’t scored in 10 games, and he’s on this little drought and getting mad at himself.

The Attack’s one-goal lead held for nearly 40 minutes as the Storm increased the pressure.

Hill said recently that his team gave up 15 or fewer chances by the coaches’ calculations, 10 or fewer in some games, even in some of the ones the team lost.

Chenard made 33 of 35 saves on Saturday to record consecutive wins.

“I think we’ve been very good past him, but he’s giving us a chance to win,” Hill said. “That’s all we can ask for.”

Papais’ second goal of the night as an offensive penalty expired midway through the third period tied the game and sent the teams into overtime.

Everything was Owen Sound in the extra frame. Barlow came close to scoring the hat-trick, but Oster managed to sit on the puck while moving completely from position to position.

Then Ethan Burroughs had two Category A chances in a tight game, but Oster turned away both.

Finally, Sedley ducked behind the net after a series of interrupted passes and fired an accurate shot under the bar.

“I kind of threw a bad pass at Burroughs to start with and then he sent one back at my feet. I put the puck behind the net and was actually looking to pass Porco, but then I saw a lane. I had to hit perfectly and luckily I did,” Sedley said. “It was an incredible feeling.”

The Attack will likely finish the season in the back half of the Western Conference, but playing in London on Wednesday and beating Rangers on the road on Friday and Storm at home on Saturday, the team feels confident as they pushes for the playoffs.

“I think we can beat any team in this league if we play the right way,” Sedley said. “It gives us all the confidence in the world.”

Owen Sound will host the Kitchener Rangers on Wednesday a day after capacity restrictions were lifted in Ontario. The Ontario Hockey League will no longer require spectators to provide proof of vaccination upon entry. The puck drop inside the Harry Lumley Bayshore Community Center is scheduled for 7 p.m.

The Attack played with five players on the blue line on Saturday. Cedricson Okitundu and Madden Steen are injured in the head. Offensive assistant coach Jordan Hill ranked the two on a day-to-day basis. Hill said Nolan Seed, out since a Jan. 16 game against Sault Ste. Marie could be back in a week or two.

Rogers TV color commentator Zach Scribner won the ‘Throw a Puck’ contest on Saturday night. The fundraising game asks spectators to purchase foam pucks to “throw” at the second intermission. The closest to the center point of the ice wins. All proceeds went to Woolley’s Warriors. Scribner pulled a beauty out of the press room after perfectly judging the ambient crosswinds and the friction of the ice surface. The perfect marriage of athleticism, grace and split-second analysis landed Scribner a Sean Durzi-signed bobblehead doll.