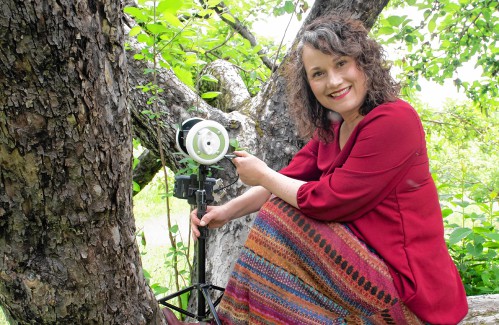 The Recorder – An artistic evolution: Valley artists win grants for their work

Four generations of Deerfield arborists have managed the land of Clarkdale Fruit Farms for more than a century, harvesting an ancient apple variety that measures just 1 inch in diameter, the most popular bite-sized Lady apple. among the youngest visitors to the farm.

“Farmer momma” Lori Holmes Clark lives in Clarkdale, where she raises her children and works as a resident artist on the farm. In art and in motherhood, she conveys the understanding that “food does not come from the store, it comes from the ground”.

Clark is a New York native whose roots in Broadway performance art inspired an audio-visual installation at The Farm, an ongoing project which, among 19 other local art projects, recently won a $4,000 grant. from the Community Foundation of Western Massachusetts through its Project Evolution grant. program.

Her installation, “Doorways – Mirth and Memory”, functions as both an immersive theatrical experience and an audio-guided tour of the farm, providing children with a fictional tale of apple-growing fairies and telling parents and other adults the stories. true and ruthless. of the old farmers of Clarkdale.

“Performance art is fleeting, it happens – and if it’s going to happen again, the agency responsible for producing it must make a deliberate effort,” Clark said Monday afternoon as he waited for the school bus to arrive from their children. “I have lupus and my body is changing and my stamina is changing, so I wanted to create something more sustainable.”

This is where Project Evolution comes in. The new program is an extension of the Community Foundation’s ValleyCreates working capital grant initiative, which since February 2020 has awarded four rounds of $1,000 microgrants to 85 artists. These small grants have provided much-needed financial relief throughout the pandemic to pay for things like studio space and supplies, says Molly Rideout, the Community Foundation’s assistant director of assets for artists.

These artists were then eligible to apply for Project Evolution, which aims to go further, allowing artists to be compensated for their time and labor and to offset expenses associated with creative production.

For Northampton creator Mark Guglielmo, the grant facilitates a long-awaited transition to mixed media, a “second act” in his career as a photo collage artist.

Her project pays homage to the Italian-American immigrant experience and envisions capturing through fine art and layered textiles a cultural marriage that gets “the short end of the stick on the big screen.”

“Italian-American representation is basically limited to ‘The Godfather,’ ‘Goodfellas,’ ‘The Sopranos,’ ‘The Jersey Shore.’ The truth of our experience is unseen, and that’s when a multicultural people come here and are forced and coerced into embracing whiteness,” Guglielmo said. “You accept the financial benefits of whiteness, but you lose your soul, you lose your language.”

He says the support through Project Evolution will be transformative.

“Everyone else is working and expecting to be paid,” he says. “Being able to get paid to examine history through art and just to create art is fundamental – you can’t do great work without financial support.”

Clark and Gugglielmo are two of 20 visual artists, musicians, poets and performers from Western Massachusetts to receive a total of $80,000 through Project Evolution. The program is supported in part by the Boston-based Barr Foundation’s Creative Commonwealth Program, a 10-year philanthropic partnership benefiting five regional foundations across the state.

Grantees also have access to a wealth of professional development resources made available through the Massachusetts Museum of Contemporary Art’s Assets for Artists program.

Rideout says up to half of Project Evolution applicants identified structured projects as new to them and said they would appreciate guidance on the non-creative components of professional art production, such as marketing and copywriting. of grants.

Grant recipients can choose to attend workshops and coaching sessions of up to two hours in length until May 2023, when the grant expires. The one-year shelf life of the funding is designed to encourage the growth and completion of projects that began simply as submissions at the application stage.

The piece is participatory and relies on a field recorder, microphone and projector to present documentary portraits of BIPOC artists and to facilitate an open mic for BIPOC audience members during the performance.

“Quiero Volver” is neither like a traditional play nor a traditional opera, and like each of the other grant recipients’ plays, Alvarez’s performance centers the community by cultivating audience engagement.

“I always knew I wanted to be a musician, but it took me a long time to come to terms with that about myself. On stage, it’s important that I invite participants to meditate and reflect,” Alvarez said. . “[The stage] is really a space for reflection where I try to push people not to do what I did.

“It’s an attempt to encourage people to be artists in a world that badly needs us,” she said.