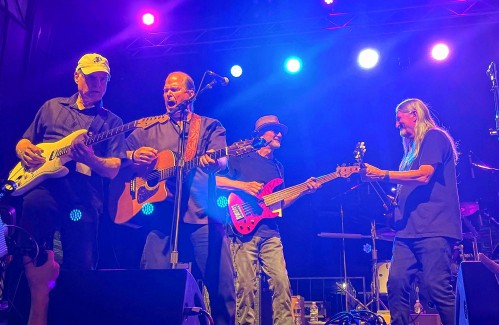 When it comes to local music legends, the band FAT tops the list. The group, which formed in 1968 and went on to record for various major labels and play with an assortment of famous rockers over the years, ruled the local scene at the time. What’s impressive about FAT is that after more than 50 years, they’re still rocking, to the delight of new and old fans alike.

FAT, with special guests Mitch Chakour and Scott Murawski of Max Creek, will perform at the Shea Theater Arts Center in Turners Falls on Friday, September 16 at 8 p.m.

The group has planned an evening of their soul rock music. They only play five to ten shows a year, so if you saw their show at the Springfield Jazz Festival in August, you know you’re in for a treat.

Peter Newland, FAT’s lead singer and primary songwriter, formed the band in 1968 with a group of musicians from the Springfield and surrounding area. These musicians were guitarists and songwriters Michael Benson and Jim Kaminski, as well as bassist Guy DeVito and drummer William “Benji” Benjamin.

FAT started out as a cover band, but soon they started producing original material. The group was signed to RCA Records and released a self-titled album in 1970. The success of this album led to shows with Grand Funk Railroad, the original Allman Brothers, Muddy Waters, Jethro Tull, ProcolHarum, Mountain, Sly and the FamilyStone. , Ten years later, Alice Cooper, and the list goes on. Their history is long and winding involving record label politics, line-up changes and numerous shows, but the music has survived it all.

FAT and bands like Clean Living were among the first to put Western Massachusetts on the national music map. They were also the first to set up their own label, Dream Merchant Records, which they launched in 1975. FAT played countless local shows and were regulars at the legendary Rusty Nail in Sunderland.

It was there that they first encountered keyboardist, vocalist, songwriter and arranger Mitch Chakour of Amherst. Chakour has had an impressive career that has seen him play with everyone from blues greats like Muddy Waters and Howlin’ Wolf to rockers like Bonnie Raitt, Peter Wolf, Aerosmith and many more. He was musical director for Joe Cocker in the 1970s and 1980s. He was also a regular at Rusty Nail.

“It was about FAT and Clean Living at the Nail from 1970 to 1973,” Newland recalled in a recent email exchange. “Then in the fall of 1973, this musical juggernaut named Mitch Chakour appeared and shook up the Western mass music scene for years. For my part, I must say that it was quite intimidating at first, to witness such a remarkable amount of talent and energy. A force of nature, if you will. But after a while, you figure out who Mitch is, and that’s exactly what he does.

The band will be rounded out by guitarist Scott Murawski, a member of Connecticut-based jam band Max Creek since their formation in 1971. Murawski has also worked with Phish bassist Mike Gordon and with Bill Kreutzmann (Grateful Dead, Dead & Co. ) and OteilBurbridge (Allman Brothers, Dead and Co.), in the group BK3.

Unlike their experience with Chakour, FAT members did not know Murawski until fairly recently. “I liken it to two native psychedelic tribes existing in the jungle for years, then not finding civilization, but finding each other,” Newland said of making music. at the same time but have never been connected.

When Jim (K) Kaminski decided to retire from FAT earlier this year, they needed a new guitarist. Newland and DeVito contacted Murawski, and he enthusiastically accepted.

“Scott Murawski obviously has great talent, great chops and great skill. But Scott has another attribute, which is quite rare and I’m not sure it can be learned,” Newland said. “Scott’s initial style, like the original members of FAT, was forged in the psychedelic era. Scott has the ability to play multiple genres at a very high level, which is necessary if you’re going to play FAT. But at other times, like the great FAT guitarists who came before him, Scott feels like he was in the garage with us when FAT started.

These musicians share many musical commonalities, and one they focused on was that they all had a close and deep connection to the Allman Brothers and their musical family.

FAT’s connection to the Allmans goes back to when the two bands were starting out. They first opened for the band in 1969, around the time the Allman Brothers released their debut album. After that, they played several shows with the Allman Brothers, including a couple at UMass Amherst.

The Chakour association is more recent; he has played with Gregg Allman and has close ties to the Tedeschi Trucks Band which includes former Allman Brothers band members. You may have spotted Chakour’s set with the band when they headlined the Green River Festival in 2016. His daughter, Alicia, is also a backing vocalist for the band.

Murawski’s link to the band is bassist OteilBrudbridge, with whom he works in BK3.

“Although our journeys have all happened at different times and in different directions, we all feel one thing in common – when you connect with the musical lineage and soul of the Allman Brothers family, you are changed forever. , and that music still lives in you,” Newland says.

The evening will end with all the musicians coming together to play the Allman Brothers classic “Midnight Rider” to acknowledge and celebrate this bond.

“Each of us will draw on our own individual experience and memories and offer our collective version of ‘Midnight Rider’ in tribute to the Allman Brothers, with gratitude to those who are still with us, in loving memory of those who have passed on to something else. , and with gratitude for the gifts they gave each of us,” Newland said.

Newland, who is currently working on a record of his reinterpretation of FAT songs, agrees that FAT reuniting with Murawski and Chakour sheds a special light on our local music scene. “I think it also helps frame the Western mass music scene as a whole and illustrates that these are legacy artists who are still vital, creative and vibrant.”

With some grants from local cultural councils, the vocal jazz ensemble Swing Set plays a series of shows here in Franklin County. The series launched last Saturday at the Erving Public Library and the next shows will be at the Tilton Library in South Deerfield on Saturday, September 17 at 3:00 p.m. and the Water S. Barn in Shelburne Falls on Friday, September 17. 30. to 6.30 p.m. Both shows are free.

Formed in 2017, Swing Set is a vocal ensemble that sings four- and eight-part harmonies like Manhattan Transfer, The Six, and more. The band focuses on Swing era standards but also ventures into other genres. They sing jazz and other musical styles with a fresh and vibrant sound, incorporating exciting rhythms, complex harmonies and vocal improvisations in a cappella and accompanied arrangements.

Can undocumented immigrants apply for a credit card?