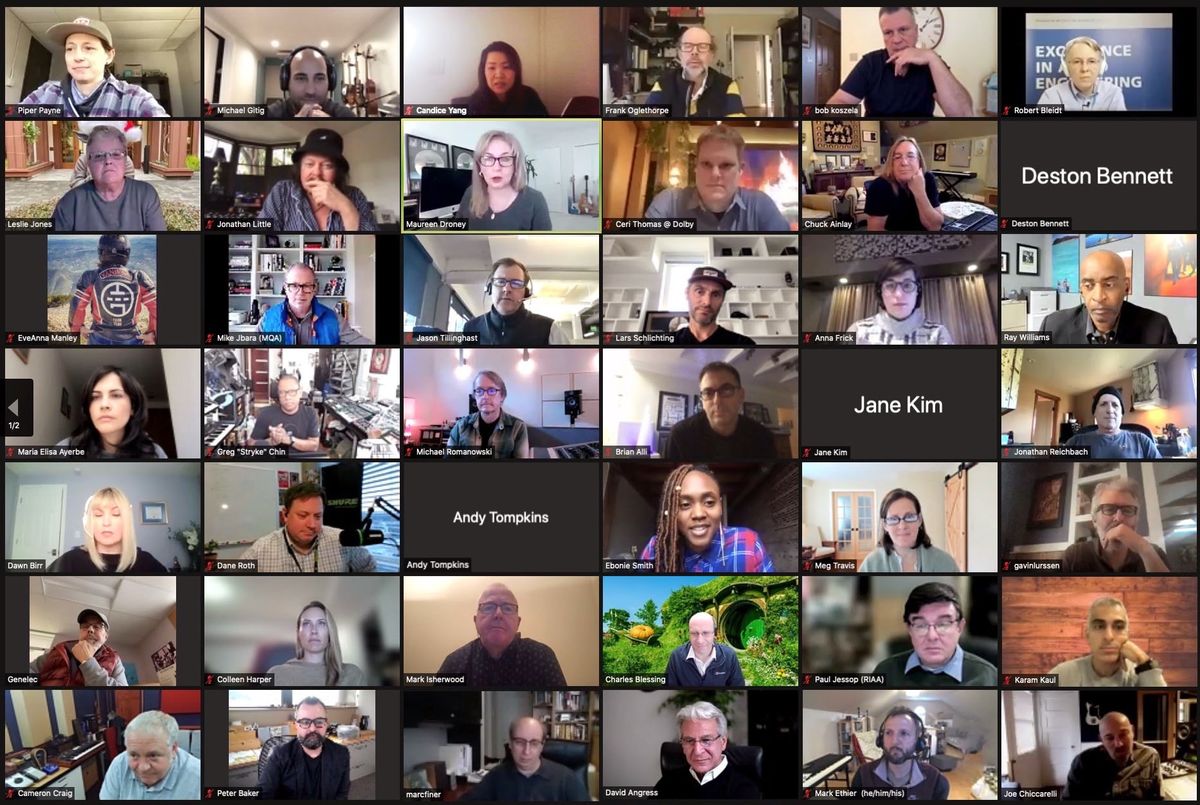 The 2021 fall meeting of the recording academy Producers & Engineers Wing Manufacturer Council was held virtually on December 9, 2021. Traditionally a semi-annual meeting, this group of industry leaders – dedicated to advancing sound quality and overall growth of the professional audio industry – sharing ideas and discussing issues of interest to all parties present, with the aim of raising awareness of the importance of high quality audio, recording credits and metadata, new developments in music streaming and other related topics.

The program included opening remarks from the P&E Wing Senior General Manager Maureen Droney as well as Leslie Ann Jones and Piper Payne, who, in addition to being members of the steering committee, are the current co-chairs of the P&E wing. Jones discussed the important role the P&E wing plays in the industry and paid tribute to the late Mark Brunner, who before his death was a senior member of the Manufacturers Council, where he frequently reported on the legislative issues of white space wireless and broadband as well as other industry issues. Each participant then introduced themselves and shared their organization’s goals in the industry.

Producer/engineer Ebonie Smith served as the keynote speaker, outlining her journey in the industry and raising awareness about the non-profit organization she founded, Amplified gender. Gender Amplified provides a platform for the promotion and advancement of women in music production and for identifying and motivating the next generation of female music producers.

Mark Isherwood of the DDEX Secretariat then took the floor to discuss new developments in credit and metadata recording standards. DDEX (of which The Recording Academy is a member, under the auspices of the P&E Wing) is the international standards organization dedicated to improving the exchange of data and information in the music industry.

This is followed by several reports on P&E Wing initiatives. Balding reported on the ongoing update to the “Recommendations for Delivery of Recorded Music Projects” document, due out in 2022. Michael Romanowski, co-chair of the committee behind a separate document, “Recommendations for Immersive Audio Production“, contributed a report on the recent work of this committee. Piper Payne offered an update on guidelines for vinyl production, and Anna Frick reported on disaster preparedness for recording studios. Finally, Meg Travis, who is director and global head of marketing for Iron Mountain Entertainment Services, shared the preliminary results of an industry-wide survey of technical best practices related to archiving and preservation. music, led by IMES and the P&E wing. earlier this year. Travis also reported on the two organizations’ recent virtual behind-closed-doors summit, “Protecting Legacies: The Art, Science and Value of Music Archives,” held last summer with music industry leaders. .

The session ended with a lively exchange among participants, sharing information and views, contact details and ideas for further discussion.

“It’s a highlight of our annual journey to meet the bright minds of our manufacturing partners and other organizations that work hard to move the industry forward,” Droney said. “This year’s session was particularly special, with the distance that separates us from the last 18 months having done nothing to diminish the broad exchange of ideas. We hope that next year we can resume face-to-face meetings, but this meeting was a triumph nonetheless, I thank everyone who participated and look forward to the next session.