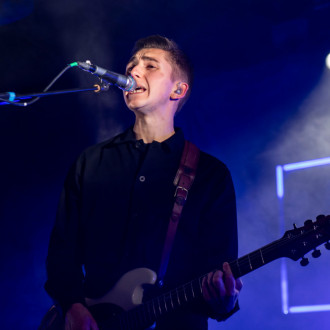 Sherlocks frontman Kiaran Crook feared their new album would be a “mess”.

The ‘Sorry’ band’s new LP ‘World I Understand’ – out Friday (21.01.22) – is their first since brothers Josh and Andy Davidson quit at the start of the lockdown, and the singer admitted he was nervous that the transition will bring Alex Proctor, Trent Jackson and Manic Street Preachers producer Dave Eringa into the fold, the latter only available on a fortnight’s notice.

He told the Daily Star newspaper’s Wired column: “I had started teaching Trent and Alex our old songs before we even thought about the new album. When I heard Dave was available so early, I I thought, ‘Oh, shit!’

“We hammered it, Alex and Trent sending me WhatsApp videos playing the new songs every day. Walking into the studio on the first day I thought, ‘This could be a mess.’

“I wasn’t confident because COVID meant we only had two group workouts together, but they did incredibly well.”

While Trent changed roles after working as part of the band’s live crew, Alex was previously in a Sex Pistols tribute band.

Kiaran – who admitted to understanding Josh and Andy’s decision to leave – hinted that the band could pay homage to new member Alex’s past.

He joked, “Alex always plays Sex Pistols songs during band practice. We might do a Pistols cover ourselves in honor of his past one day.”

Meanwhile, last year the band played at some of the UK’s beloved popular venues which have been hit financially hard amid the COVID-19 pandemic, and Kiaran previously warned that without these spaces “the next generation of bands cannot survive”.

He said: “A big part of this industry is live gigs, and it’s not just the bands that suffer from it! It’s the venues, the staff, the guitar/drum techs, the sound engineers, the roadies. .. We hope this tour can help support these popular spaces which in turn will help those connected and give upcoming bands the platform to grow.

“The message is simple. Without these venues, the next generation of bands cannot survive. Let’s use this tour to thank all of the amazing places that have helped build some of the most successful and inspiring bands in the world!”