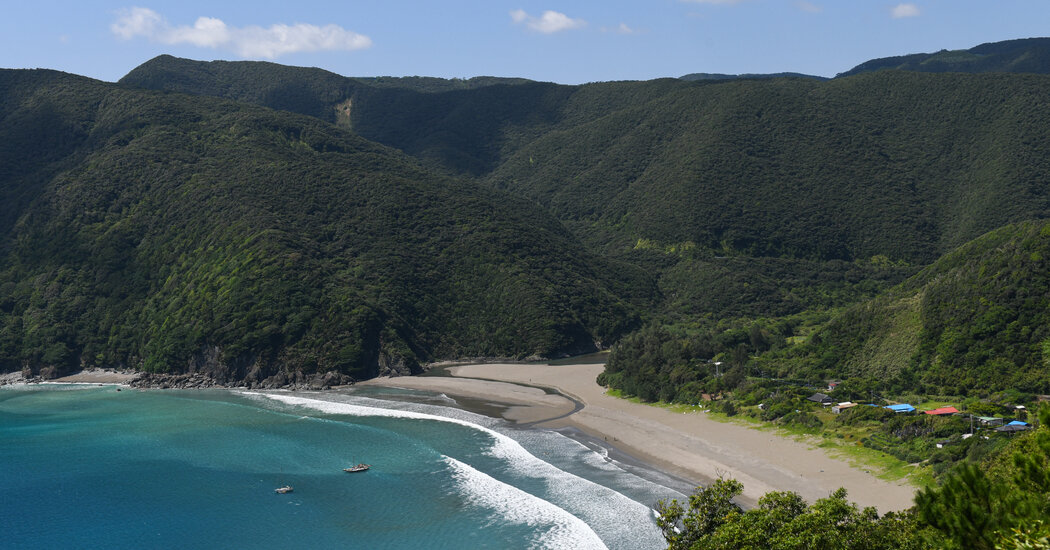 KATOKU, Japan – Standing on its mountain-fringed beach, there’s no indication that the Japanese village of Katoku even exists. Its handful of houses are hidden behind a dune covered with morning glories and pandanus, the song of the cicadas is only interrupted by the cadence of the waves and the call of a jay with azure wings.

In July, the beach became part of a new UNESCO World Heritage Site, a reserve of verdant peaks and mangrove forests in the far southwest of Japan that is home to nearly a dozen threatened species.

Two months later, the placid air was split by a new noise: the rumble of trucks and excavators preparing to remove much of the Katoku Dune and bury a two-story concrete wall intended to brake. erosion.

The seawall project demonstrates how even the most precious ecological treasures cannot survive Japan’s obsession with construction, which has long been its response to the threat of natural disaster – and a vital source of economic stimulus and political capital, especially in rural areas.

But the plan to erect the concrete berm on the pristine beach, a scarce commodity in Japan, is not just about money or votes. It has torn the village apart as locals fight deeper forces reshaping rural Japan: climate change, an aging population and the hollowing out of small towns.

Supporters of the project – a majority of its 20 residents – say the village’s survival is at stake, as it has been hit by more severe storms in recent years. Opponents – a collection of surfers, organic farmers, musicians and environmentalists, many from outside the island – argue that a seawall would destroy the beach and its delicate ecosystem.

Leading the opposition is Jean-Marc Takaki, 48, a half-Japanese Parisian who moved into a bungalow behind the beach last year. A nature guide and former computer programmer, Mr. Takaki began campaigning against the wall in 2015, after moving to a nearby town to escape the stress of city life.

The fight embodies a clash that takes place in rural areas of Japan. The elders see their traditional livelihoods in industries like logging and construction threatened by newcomers dreaming of a pastoral existence. Villages may need new residents to bolster their eroding populations and economies, but sometimes they get irritated by their presence.

When Mr. Takaki first visited Katoku in 2010, it seemed like the paradise he was looking for. â€œI had never seen a place like this,â€ he said.

Everything changed. “If they finish building this thing, I don’t know what we’re going to do here.”

The Japanese countryside is plagued with construction projects like the one planned for Katoku.

The country has dammed most of its rivers and lined them with concrete. Tetrapods – giant concrete jacks built to resist erosion – are stacked along every living inch of coastline. After the 2011 earthquake and tsunami that devastated the northeast of the country and triggered the nuclear meltdown in Fukushima, planners surrounded the area with levees.

The plans often make sense for a country plagued by earthquakes, volcanoes, tsunamis, landslides and typhoons, said Jeremy Bricker, associate professor at the University of Michigan specializing in coastal engineering.

The question, he said, is “how concrete is this there because of what needs to be protected and how much is it part of Japanese culture?”

In some cases, concrete could be replaced with natural buffers, like additional sand or dense vegetation, Bricker said. While some Japanese civil engineers use such alternatives, he added, â€œJapan has been so focused on promoting work for traditional contractors – that means pouring concrete – that there was no not had as much emphasis on soft solutions.

The use of concrete is even greater in Amami Oshima, Katoku’s native island, than elsewhere in the country, said Hiroaki Sono, an 83-year-old activist who successfully opposed large projects on the island. .

Public works there are heavily subsidized by a law of the 1950s aimed at improving local infrastructure. Politicians keen to vote in the region have renewed the law every five years, and Amami Oshima’s economy is heavily dependent on it, Sono said, adding that most Katoku residents have ties to the industry. .

Environmental engineers describe beaches as dynamic environments – which grow, shrink and change with the seasons and the tides. New elements like a dike can have unpredictable and destabilizing effects.

Rural communities are no different.

In Katoku, the change came slowly, then suddenly.

For decades, residents have refused government offers to shield the shore with concrete.

But in 2014, two powerful typhoons swept away the beach and uprooted the pandanus that protected the village. The cemetery, built on top of a high dune separating the village from the sea, was now perched precariously above the ragged shore.

The storms have shaken the confidence of the villagers in the ability of the bay to protect them.

“The waves have reached the cemetery,” said Sayoko Hajime, 73, who moved to Katoku with her husband – a native – 40 years ago. â€œAfterwards, everyone was terrified; they panicked.

After the typhoons, the village asked the prefectural government for help. Planners recommended a 1,700-foot-long concrete wall to keep the ocean from devouring the beach.

Mr. Takaki, who then lived nearby, and a handful of others objected. They recruited analysts, who concluded that the government failed to demonstrate the need for concrete fortifications. These experts argued that a hard defense could hasten sand loss, a phenomenon seen in nearby villages where the ocean collides with weathered concrete walls.

To complicate matters further, a river – home to endangered freshwater fish – carves a channel out to the ocean, moving up and down the beach with the seasons.

The prefecture agreed to reduce the proposed wall by more than half. It would be covered with sand to protect the aesthetics of the beach, they said, and if that sand was washed away, it could be replaced.

Yet officials continue to insist on the need for a berm. In other villages, “there is a strong feeling that when a typhoon arrives, they are protected by their dike,” said Naruhito Kamada, the mayor of Katoku commune, Setouchi. “And the typhoons are getting bigger and bigger.”

Other options are worth exploring, said Tomohiko Wada, one of the many lawyers who took legal action to stop the construction: â€œThe villagers wanted to do something, and the prefecture said ‘concrete’, because that’s what Japan does, â€he said.

Local authorities declined to comment on the trial. But Japanese law does not provide for a stop-work order in such cases, and the prefecture appears determined to complete the work before the courts rule.

Competing visions of the future

But the villagers are wary of strangers.

Island culture is conservative. In baseball-mad Japan, locals prefer sumo, an ancient sport heavy with religious significance. They also have an unusual affinity for the military: a small museum near Katoku details Japan’s last efforts to resist American forces during World War II. The pilots of kamikaze boats are highlighted.

Chiyoko Yoshikawa moved to Katoku with her husband four decades ago because the river water was perfect for the local crafts of indigo dyeing. Her husband is now dead, her daughter has moved, and the studio – Katoku’s only business – has become primarily a hobby.

Ms. Yoshikawa opposes the construction, but is reluctant to get involved. Even now, she remains “an outsider,” she said.

She may be wise to stay away. Mr. Takaki’s efforts ignited violent passions.

Last month, in the presence of two New York Times reporters, Norimi Hajime, a villager who works for a contractor building the Katoku berm, confronted Mr. Takaki on the village’s main road.

No one wants construction, Hajime said, but without it, a typhoon will wash away Katoku.

Storms, Mr Takaki replied, are not the biggest threat to the colony. Her elementary school closed years ago. Its youngest resident, besides Mr. Takaki and his partner, is a woman in her fifties. Bus service is now by appointment only.

The beach is Katoku’s most precious asset, Mr. Takaki argued, which sets it apart from dozens of other dying hamlets along the Amami Oshima coast. In their efforts to save the colony, he said, the villagers could kill it.

Standing on Katoku’s main road, there was no indication that the beach even existed. Mr. Hajime could only see the village.