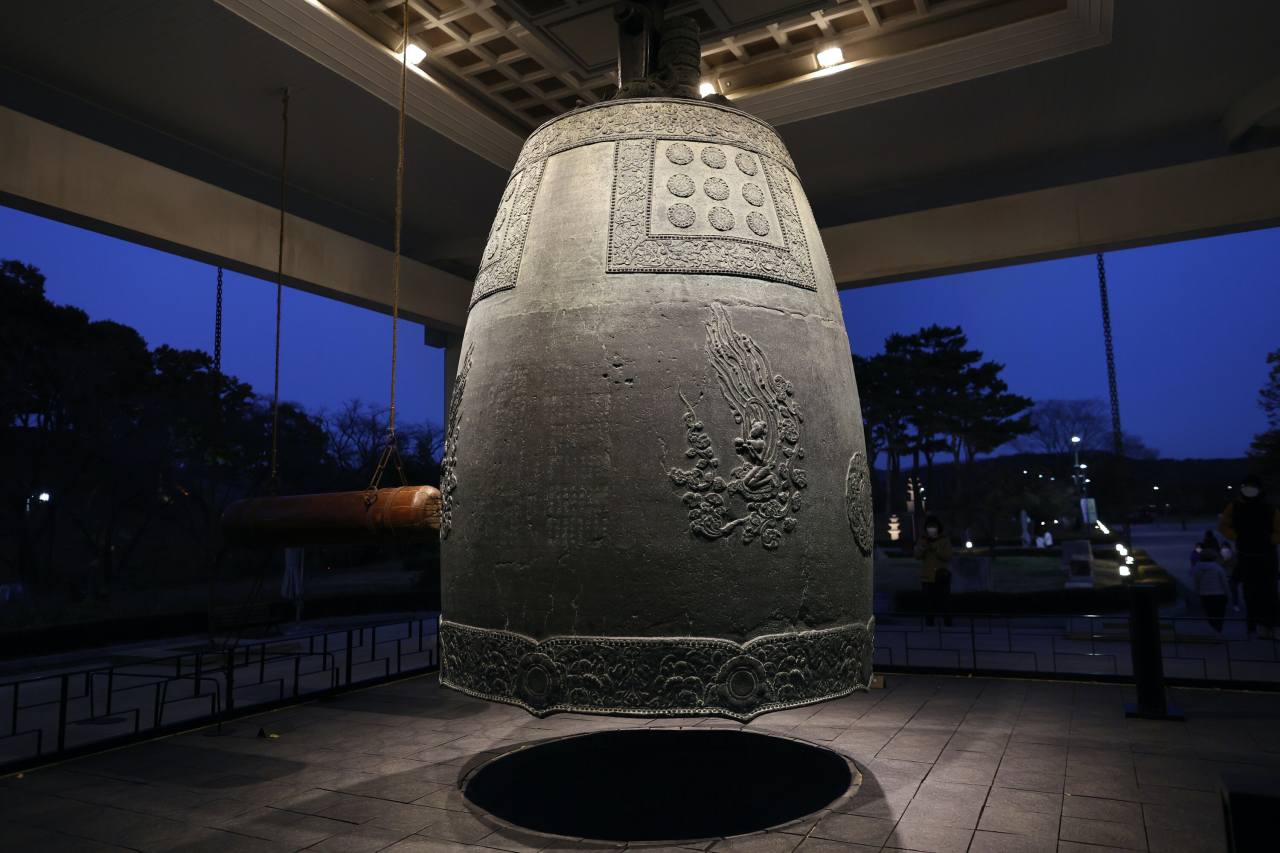 [Visual History of Korea] The divine Emile Jong bell has resonated in the hearts and souls of Koreans for 1,250 years

During the golden days of the kingdom of Silla in the 8th century after the unification of the Korean kingdoms, the national religion, Buddhism, took Silla to a whole new height.

Peace and prosperity have been expressed in the creation of Silla’s finest Buddhist treasures, some of which have survived centuries of tumultuous history.

A trio of Buddhist treasures – the house, body, and voice of Buddha – were completed in 771, when King Seongdeok the Great’s divine bell was successfully cast after decades of fruitless efforts.

The deep and lasting sounds of the divine bell echoing in the hearts and minds of those nearby were to “transcend believers directly into the” world of truth “” as it was inscribed on the divine bell.

Silla’s stonemasons, along with more well-known Baekje artists, created the unique 3.5-meter-high stone Buddha in the Seokguram Cave in the mid-8th century.

The Buddha house at Bulguksa temple had already been built in 528.

The sound of King Seongdeok the Great’s Divine Bell, also known as the Bongdeoksa Temple Bell, named after the original house of the Bronze Bell, has been heard all over the Silla Kingdom.

A dragon named Poroe sits atop the crown of the bell. â€œPoroe, a mythical dragon, is afraid of whales and his cry is the sound of the bell when struck by a whale-shaped piece of wood,â€ said Han Jung-ho, Buddhist art expert and professor at Dongguk University.

King Seongdeok’s third son, the 35th King of Silla Gyeongdeok, wanted to dedicate the giant bell in honor of his father who is described on the divine bell as “King Seongdeok whose virtue was as high as a mountain and also deep as the sea â€, but he never saw the completed bell.

It took King Gyeongdeok’s only son, King Seongdeok’s grandson, 36th King Hyegong of Silla, to finally complete the making of the divine bell in 771, after 34 years of testing.

The man who oversaw the successful founding of the bell was none other than the future 37th King Seondeok of Silla, who reigned from 780 to 785.

King Seondeok, whose birth name was Kim Yang-san, a member of the aristocracy of the Jingol caste, served as the prime minister of the 36th King Hyegong (765-780) while overseeing the completion of the bell.

King Hyegong, who became king at the age of 7, survived several mutinies during his 16-year reign. He was killed at the age of 23 during a mutiny led by Kim Yang-san, who became the next monarch, the 37th King Seondeok of Silla.

Casting such a giant bell with 18.9 metric tons of molten metal for the 3.66-meter bell – nearly 25 centimeters thick in its thickest parts – seems like an impossible task in the 8th century, even afterwards. to have combined the know-how of experts from the four Korean kingdoms that Silla had brought together.

The divine bell of King Seongdeok the Great has withstood 1,250 years of external elements.

The site of the bell foundry has been lost to history, but researchers have located ancient Bronze Age metal processing sites widely scattered over an area covering approximately 66,000 square meters.

A team of Korean researchers and engineers from 12 disciplines conducted extensive research on the Divine Bell in 1996.

Metals can weaken and break when repeatedly frozen and thawed, but the composition of the Divine Bell holds some of the secrets of its longevity.

A team of researchers from the Research Institute of Industrial Science and Technology has published an analysis of the composition of the bell.

A legend that a child was sacrificed during the making of the bell – where its other divine bell name comes from, Emile Jong (Emile Bell) – has been found to be false, at least according to the analysis of the composition of the metal.

It’s mostly copper, about 80%, and tin, zinc, lead, and sulfur make up the rest of the bell.

The presence of sulfur could have a role in preventing the bell from breaking, according to one of the researchers.

The deep and lasting resonance of the sound of the divine bell was found mainly in two low frequencies in the range of 64 Hz, causing the flapping phenomenon.

A concave opening on the floor, designed as an echo chamber under the divine bell to send the ringing sounds to the underworld, further amplifies its sound.

Another unique feature of the Silla bell design is a high frequency chamber tube at the top of the bell which absorbs high frequencies.

The high frequency chamber tube is designed around Poroe, the mythical dragon, which has an 8cm diameter opening arch from which to hang the 18.9 ton bell on the steeple.

When King Seongdeok’s Divine Bell was moved to its current steeple at the National Museum of Korea in Gyeongju, North Gyeongsang Province on May 27, 1975, engineers were faced with a mathematical dilemma.

Engineers calculated the weight of the divine bell and the force created when the bell is struck while hanging from the new steeple. A steel rod that could support the bell was tested and a new modern steel rod was cut to the right specifications to support its weight.

It all came to a standstill, however, when the new metal rod, measuring 15cm in diameter, did not pass through the 8cm diameter opening of the dragon’s bow, called Yongryu, at the top of the crown of the dragon. the bell.

Engineers had to use the original metal rod which they believe was made during the Joseon era, when the previous steeple was built and when the original Bongdeoksa temple was swept away in a great flood in 1460.

Researchers still have no idea how the ancient Koreans were able to make such a strong steel rod.

The flood was not the only life-threatening event the Divine Bell endured.

During the Joseon period, when Neo-Confucianism was the law of the land, most of the country’s bronze Buddhist bells were made into copper coins and military weapons.

King Sejong the Great had to intervene and issue a decree in 1424 “not to destroy the bell of the Bongdeoksa temple”, according to Joseon Sillok, the real records of the Joseon dynasty of Korea.