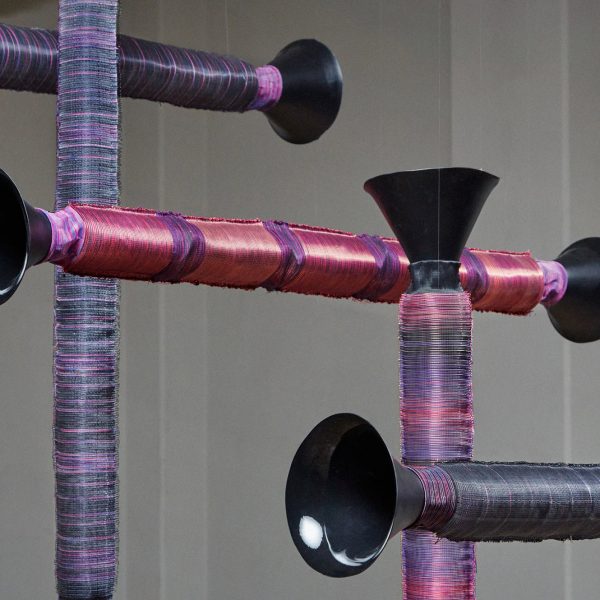 The Re-Sounding Yarns project, presented at Dutch Design Week 2022consists of eight overhead speakers that play a soundscape from different weaving environments, ranging from the gentle rhythms of weavers to the thundering electric looms used in factories.

When a sound signal is emitted from the loudspeakers, the copper wire transmits this signal to small magnets attached to each end of the woven tubes, creating an electromagnetic field which vibrates and thus generates sound.

“I allow the fabric to express its production,” Vogels explained.

A weaver herself, Vogels designed the installation to counter the perception of textiles as “silent” and highlight sound as an integral part of the weaving process.

“When my loom isn’t working properly, I don’t see it at first — I hear it,” she told Dezeen. “I started thinking about how I use the loom almost like an instrument, where I do these rhythms and the more rhythmic I get, the more productive I am.” 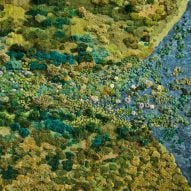 “And what weaving looks like in different contexts in the wider industry, which obviously ranges from hand weavers in specialist textile labs to mass industrial weaving facilities,” she added. “How do I actually understand sound as an indicator of what’s going on in that space?”

Vogels undertook extensive listening and ethnographic research to understand these different scales and found that – contrary to his own practice – sound in some industrial environments can be so loud that it actually poses a health hazard to workers.

And while workers in Western factories generally enjoy good protection, Vogels says this is not the case everywhere in the world.

“Sounds are revealed not as unimportant by-products of textile production, but as indicators of the socio-political contexts of weavers, exploitative supply chains and working conditions,” she explained.

Vogels made its speakers from colored monofilament fishing line and copper wire, hand-woven together in a circular pattern that could be opened to form tubes.

The copper wire is responsible for carrying the electrical signal needed to vibrate the structure and produce sound, while the translucency of the monofilament is meant to show that there is nothing inside the enclosure emitting the sound, but the textile structure itself. 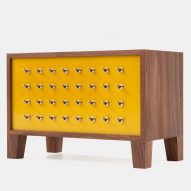 To amplify the resulting audio, Vogels inserted a clear plastic tube into each woven sleeve and surrounded it with black listening cones. Together, the array of eight speakers, shaped much like double-ended trumpets, produce an audible hum similar to a white noise machine.

Vogels recorded most of the soundscape samples herself while visiting different factories and working in her own studio. These sound clips were then looped and overlaid with recordings of giant factories in Bangladesh, which she found on YouTube.

Other textile creations on display at the design festival included a collection of alternative leather clothing made from the earth and one burnt and mown carpet that visualizes how drought affects Dutch landscapes.

The photograph is by Ronalds Smits.

Re-Sounding Yarns was on view October 21-30 as part of Dutch Design Week 2022. See Dezeen Events Guide for an up-to-date list of architecture and design events happening around the world.